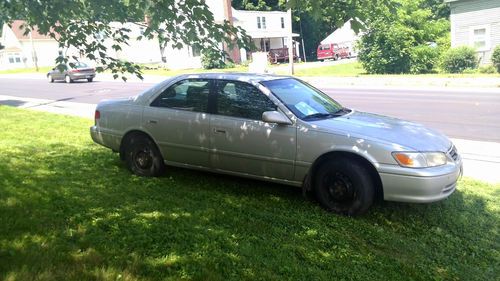 Condition: UsedA vehicle is considered used if it has been registered and issued a title. Used vehicles have had at least one previous owner. The condition of the exterior, interior and engine can vary depending on the vehicle's history. See the seller's listing for full details and description of any imperfections.Seller Notes:"at 663000 miles on original motor it is tired, as in, has little compression. the exhaust manifold has started to leak so it's a little loud. cruse wore out 50k ago and the ac works when it wants.always starts shifts smooth,still gets 30+ mpg."

This car was purchased new with 111 miles on it.At 663000 miles it has little compression. the exhaust manifold has started to leak so it's a little loud. cruse wore out 250k ago and the ac works when it wants to.It always starts ,shifts smooth,still gets 30+ mpg. It is on the third clutch , aprox. 120000 on clutch. No big rust issues,just some rock dings and a spot above the windshield.the hood has been repainted (poorly). Throw in a junkyard engine and its good for 300,000 more miles.Replace the drivers seat though, its real tired.