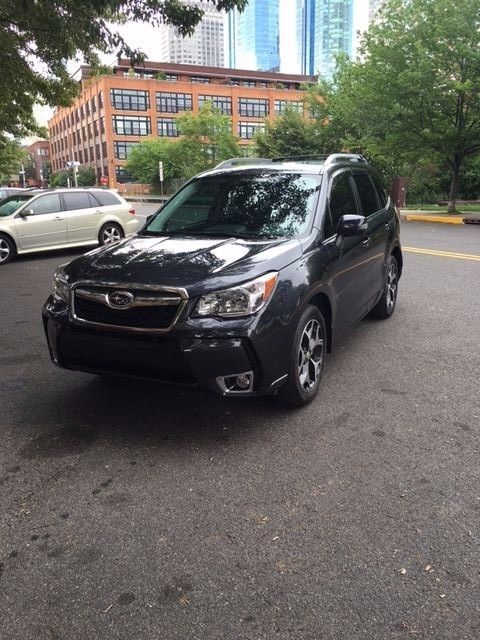 If you have any questions or would like to view the car in person please email me at: miriammmmantooth@oxfordfans.com .

This Forester carries a rebuilt title, which was issued back in 10/2015. I have the carfax report if you're
interested. They issued a not actual mileage title at the time (this is usually when insurance company cannot
power up a car to verify mileage). I can vouch mileage is correct, as last known mileage was on 10/28/2015, as per
Carfax, at 26243. I am OK with potential buyers bringing/sending a 3rd party inspector on the vehicle before
purchase, as this Forester is 100%.

There are a few scratches on the rear bumper, and rear tow hook cover popped off. That's about it as far as
problems.

This Forester is dealer maintained. All manuals are included. All recalls/TSB's are up to date.

Fiat Chrysler Automobiles isn't the only big name in the auto industry releasing details on its future plans. Subaru, and its parent company Fuji Heavy Industries, is aiming to bump its North American sales up from 478,000 to 600,000 by 2020. Now, that seems pretty reasonable, especially in the face of FCA's hugely ambitious goals for Alfa Romeo and Maserati. It's how Subaru will go about increasing the sales, though, that has us intrigued.
A focus on more fuel-efficient, direct-injection engines will complement a new platform, while the company is contemplating expanding capacity at its Indiana factory, which will now have more room since Toyota Camry production will be ending there.
As for that new platform, it's called the Subaru Global Platform. Original, we know. It's a modular deal and will eventually underpin a vast range of future Subies following its debut in 2016. The new platform may also end up underpinning a seven-seat SUV, which would serve as the successor to the Tribeca and debut between 2016 and 2020, according to Automotive News.