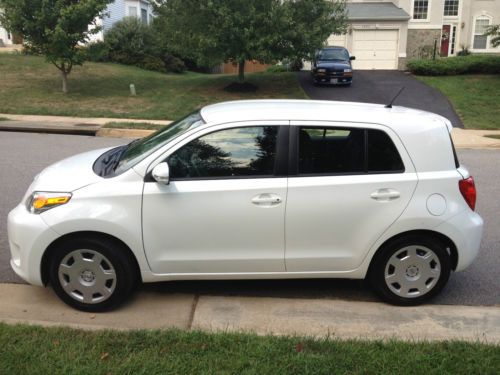 Condition: UsedA vehicle is considered used if it has been registered and issued a title. Used vehicles have had at least one previous owner. The condition of the exterior, interior and engine can vary depending on the vehicle's history. See the seller's listing for full details and description of any imperfections.Seller Notes:"Great Car. Runs Great. Tires are less than a year old. Selling the vehicle because I was a truck. Miles are all highway.Used the vehicle for the gas mileage benefits while I lived in D.C."

Great Car. Runs Great. Tires are less than a year old.  Selling the vehicle because I was a truck.  Miles are all highway. Used the vehicle for the gas mileage benefits while I lived in D.C.

The Scion brand seems to be a bit rudderless in the auto industry at the moment. The company just doesn't seem to know what audience it wants to appeal to. For this year's SEMA Show in Las Vegas, the automakers is kind of just going wild with bizarre customs like a turbocharged FR-S with a targa top (pictured above).
Taking the roof off of a FR-S isn't an entirely new idea, but this targa-top version at SEMA is certainly a new take. In addition to just chopping a panel out of the roof, the custom also adds a louvered rear window in an especially cool touch that lends an '80s coupe vibe. To take the wild look even further, the car wears a bespoke wide body kit with an integrated rear spoiler and center-mount exhaust, and all of the bodywork is done in metal. Being for the premiere aftermarket show, performance also has to play a role, and the upgrades include a Greddy turbo kit, coil-over suspension from KW and big brakes from Wilwood.
If the FR-S seemed just slightly inspired by the '80s, the xB for the show goes for a look that's a decade older with inspiration from '70s conversion vans and skateboarding. With design help from skateboarder Riley Hawk, the custom is painted in shades of groovy earth tones with bubble windows in the rear, and the cargo box on the roof stores skateboards. The interior features touchstones of the time with a mix of wood-grain trim, shag carpet and comfy brown leather.

Scion FR-S may be getting supercharger kit from TRD

The Scion FR-S was just named the Hottest Sport Compact at the 2012 SEMA Show, and Toyota Racing Development (TRD) is apparently looking to make this car a little hotter. According to Car and Driver, TRD is close to coming up with a supercharger to fit to the car's 2.0-liter flat-four engine in order to squeeze out a little more performance. Currently, the FR-S produces 200 horsepower, but there's no guessing how much a supercharger could improve this figure.
With Subaru seemingly hard at work on a new turbo engine for the BRZ and even possibly a BRZ STI model, it is only logical for a force-fed FR-S to be in the works as well. Surprisingly, though, the report says that supercharger would be unique to the FR-S, but since the Scion and Subaru BRZ are mechanically identical, it isn't clear how this would be accomplished. TRD already offers plenty of upgrades for the FR-S such as exhaust, brake and suspension kits, and it offers a handful of superchargers for other models including the 5.7-liter V8 used in the Toyota Tundra and the 4.0-liter V6 used in the Tacoma.