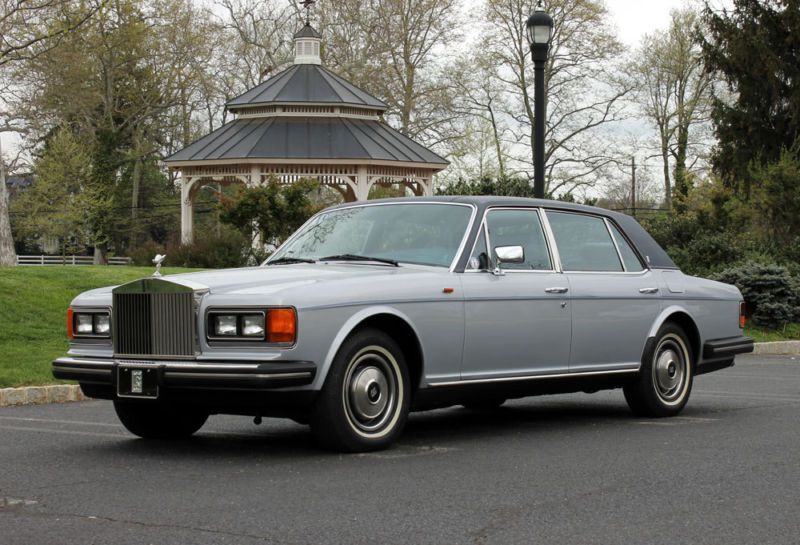 Please message me with questions at: ardellamicheau@netzero.net .

Nothing says you have arrived than showing up in a Rolls-Royce Silver Spur, the epitome of high end luxury and
presence. It is still the bench mark for all automotive manufactures and budding millionaires alike. This stunning
piece of automotive artistry is a 3 owner 1985 Rolls Royce Silver Spur with just over 21,200 miles. The original
owner was from GA and drove it until 2004 when they sold it to a dealer in Arizona who used the car for several
months before listing it for sale. That dealer sold this icon in 2005 to an enthusiast in Virginia. The current
owner of this lavish vehicle purchased it several years ago to add to his small collection of English and antique
cars. He is a car collector and the proprietor of a well-respected restoration shop in Monmouth Co, NJ. He is also
a certified appraiser and judge for the AACA and CCCA as well as a concour judge in several prestigious events.
What does this mean to you? A man of this caliber will only want and own the best. This also has a clean CARFAX
showing no accidents or issues.

The overall condition of this Rolls is quite stunning. This is truly as nice in person as it looks in these
pictures. It has excellent silver paint that was redone prior to the current owner. Smooth and glossy, just as you
would expect. The original blue Ever Flex roof is in wonderful condition. The bright trim is equally as nice as the
rest of the exterior. The blue leather interior in well preserved condition. There is only the slightest showing of
wear on the driver’s seat, as expected for a vehicle of its age. The Burl Wood dash, door caps, and rear seat
picnic tables are in excellent condition. Even the upholstery inside the trunk is in great shape. It even has its
original tools. Everything works on this fantastic, well maintained and sorted vehicle. The 6.5 L (411ci) V8 Fuel
Injected engine powers this smooth ride propelling down the highway in absolute comfort. The saying "Nothing rides
like a Rolls" is not just braggadocio. I have had the pleasure of riding in this car on many occasions and I can
tell you, it has to be one of the smoothest vehicles I have ridden in. The suspension and braking system is in
perfect working order. The air conditioning is nice and chilly. The fluids were all recently changed and the tires
were also replaced within the last few years just due to age. It needs nothing but a garage to sleep in. There were
only 6,238 Silver Spurs produced from 1980 thru 1989. I am sure you will have additional questions and I welcome
any and all inquiries before you buy this lovely vehicle. This is an enthusiast owned and well sorted Silver Spur
that needs nothing but a new loving owner. Live the life of luxury and opulence at a fraction of the original cost.