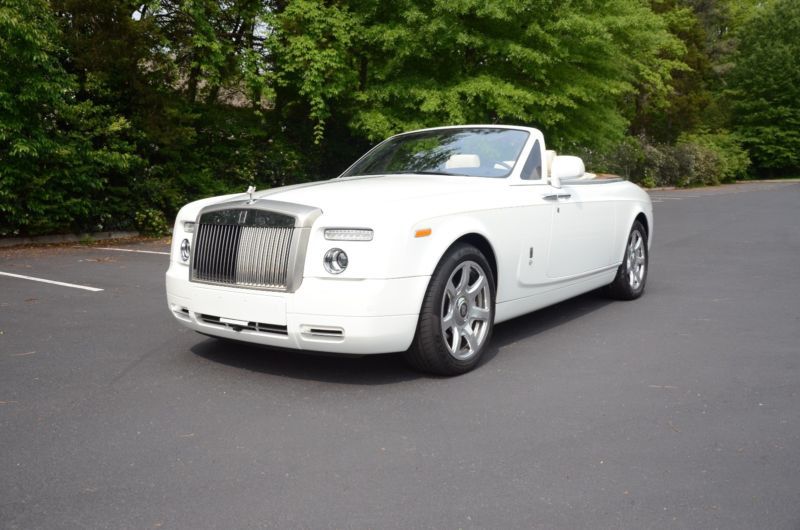 2010 Rolls-Royce Phantom Drophead Coupe
Stunning and Immaculate!
Finished in Cornish White exterior with a Creme interior, Navy Blue Soft Top
Only 17,520 miles!
100% Clean Carfax, no accident or damage history, & regularly serviced
Non-Smoker
**TITLE IS IN HAND**
Fully Optioned
Teak Decking
21" Fully Polished Seven Spoke Wheels
Rolls Royce Monogram Headrest
Sisal Floormats
Veneered Steering Wheels Spokes
Brown Oak Woodgrain Interior Accents
Automatic Door Closers
Retractable Spirit of Ecstacy
And More!
This car has always been garaged kept and well taken care of. Recently professionally detailed and the car looks
like it did when it came off the showroom floor. Here is your chance to own it for half the price when it was new!
Don't hesitate to contact me with any other questions.

There aren't very many better places to show the Rolls-Royce Phantom Drophead Coupé Waterspeed Collection than at the Pebble Beach Concours d'Elegance. Not only is this aquatic-themed land yacht parked on the Concept Car Lawn appropriately very near the Pacific Ocean, it's being seen by some of the most wealthy car enthusiasts in the world on one afternoon.
The car actually debuted in May in Europe, but Rolls-Royce decided to show it again to West Coast customers. This luxury droptop is dedicated to former British waterspeed record-holder Sir Malcolm Campbell, hence the name. Campbell used a boat powered by a Rolls-Royce R engine to reach 126.33 miles per hour in 1937 on a lake in Italy and break the old milestone. Later, he took the same craft to 129.5 mph to further establish his dominance.
The Phantom Waterspeed takes inspiration from these accomplishments with a two-tone look that mixes shining Maggiore Blue exterior paint and a brushed steel tonneau cover to replace the normal teak. The blue color scheme even extends to the engine and interior trim in combination with contrasting Windchill Grey leather. Rolls isn't building many of these marine-inspired leviathans; check one out on the lawn at Pebble Beach in our gallery.