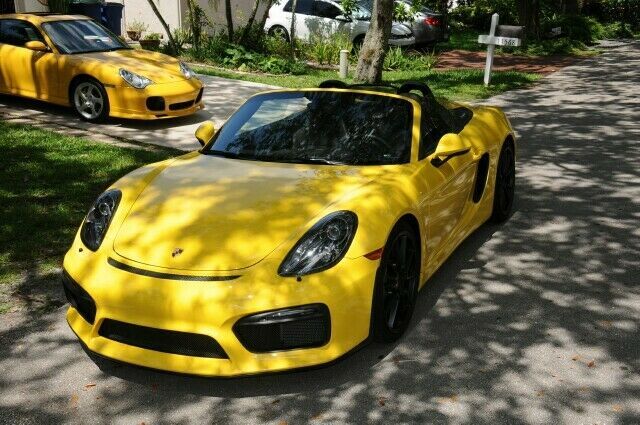 This is an incredible 2016 Porsche Boxster Spyder Convertible. This Porsche Boxster Spyder Convertible is finished
in beautiful Speed Yellow Exterior over Black Alcantera Leather Interior.The 2016 Porsche Boxster Spyder
Convertible has only1200 miles on it... that's NOT A TYPO .. JUST TWELVE HUNDRED MILES !!! The overall exterior
condition of the vehicle is exceptional. The vehicle looks absolutely BRAND NEW. The paint is deep and glossy no
dings, scratches or dents at all . The interior shows no wear. The leather looks BRAND NEW. The carpeting is plush
and free of any tears. The dash and door panels are in perfect shape. The mechanicals and electronics function
perfectly. The tires on this Porsche have basically all of the tread life left. This Boxster Spyder is loaded as
you can see from the original window sticker.I have two keys, the original window sticker, and the owners manuals.
It has been stored in a climate controlled facility.