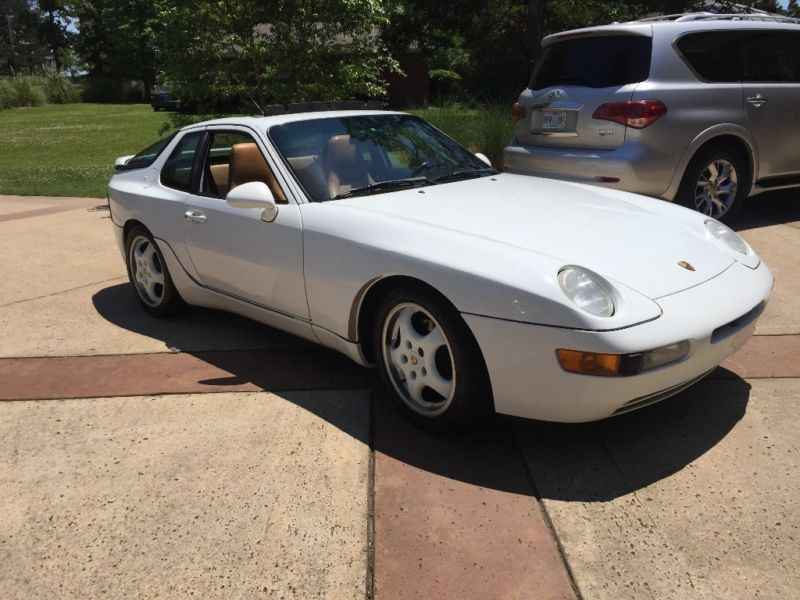 1994 Porsche 968 coupe I bought from original owner who bought it at a dealership in mobile Alabama on 6/30/93 and
has been in Mississippi since day one.
Grand Prix white with cashmere interior
All original has Porsche radio and cd changer that work great . Has complete Porsche tool kit, red spare, and air
pump. 2 sets of keys, manuals .
Cold AC
Runs great , smooth, shifts well, stops great
New tires, Less than 50 miles of a set of Michelin pilot sport as/3 s
Just changed oil with Valvoline VR1 20w50, and a maule air filter and oil filter. And used lubro moly jectron in
the tank.
Like I previously stated I bought this car from the original owner , he had just periodically driven over the
years. I drove it back to my home about 50 miles away and it ran flawlessly. Upon getting it home I changed the
oil, filters and put a new set of michelins pilot sports on it ( the old tires were date coded 2004 and looked
brand new even had the nipples intact)and had it detailed out. The reason I'm selling is a S65 AMG is now available
that I've been trying to get my hands on, and need garage space. If the 968 doesn't sell no big deal I'll keep and
let the value continue to climb. I've taking a lot of pics and pics of the very few issues with the car, I m not
going to hide anything. I'll list a few things the car either needs or what I would do if I keep it.
Future needs:
Sunroof goes up with the switch but when you re attach you have to manually tighten it back down. I looked it up
and it's a common problem and I think the tensioners need adjusting.
The timing belt ( have paperwork) was done 5/7/07 at the dealer at 45k miles, An fit has been driven very little
since that time.
The cup rims do have curb rash , I would get a wheel refinisher to repaint and smooth out the rim lip.
The driver seat minus the bolster is in good shape , does have a hint of patina. Still looks and sits well just
maybe something to consider having the bolster area repaired.
The last issue is the odometer quit ( speedometer works fine) on me, I've read this is a common problem with these
plastic gears loosing teeth and I've looked them up and they are about $25 bucks and a few hours worth of work.
The PO had the clutch replaced, battery , brake master. Cylinder and booster all done in 2013 from an independent
mechanic in the area he moved to, just wanted to note.
Also I'd like to add that I think I have the car priced well in order take care of theses issues.
The car cranks, runs, shifts extremely well and the body is straight with no big dents or scratches. Still presents
very well! Also just want to note that I've owned 911's, 928 GT, 912 and this is by far the best handling and most
fun Porsche I've driven/owned!