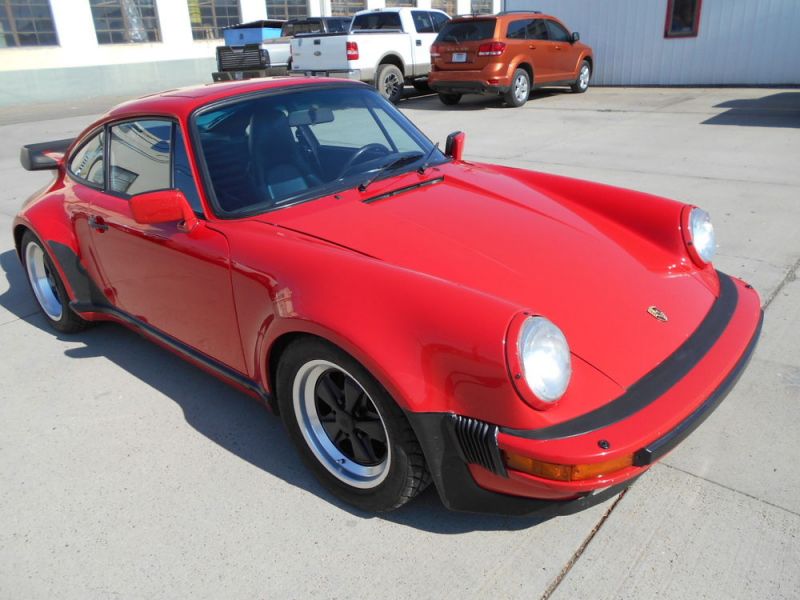 Up for sale is a beautiful 1987 Porsche 911 Turbo (a.k.a. 930 Turbo).
The interior is stock and well-kept, with little wear-and-tear for its age. The Guards' Red exterior paint
is in excellent condition with only minor flaws from ordinary road use. The car has been garage-kept and tended in
a heated garage. It comes with OEM Fuchs wheels in the original black with machined rims.
The engine has been completely restored by Rothsport, Inc., including a full tear-down and rebuild. Approximate
engine output is 325 horsepower. The stock 4-speed Porsche gearbox was retained. The car's suspension was
completely rebuilt and replaced for competition use, including a 1-inch drop and high-performance shock absorbers
and springs. The exhaust has been replaced by a custom titanium dual-outlet system by B&B Exhaust.
The 930 Turbo was a tour-de-force when it was released, and the Turbo name has consistently been applied only to
the highest-performing variants of the 911 ever since. While later models eventually softened and became more akin
to grand tourers, the original 930 was a knife-edged competition machine -- lightweight, powerful, and terrifyingly
fast. Armed with engine, suspension, and braking technology from Porsche's most competitive and world-beating
prototype race cars, the 930 set the standard for sports cars around the world.
The 911 of the late 1980s represents a sort of purity of purpose for the sporting car enthusiast, a perfect balance
of raw prowess and refinement, and as such is extremely desirable. This 911 Turbo is the ultimate example of the
breed, an incredible specimen of a car that is sure to only become more valuable as they become more rare over
time.