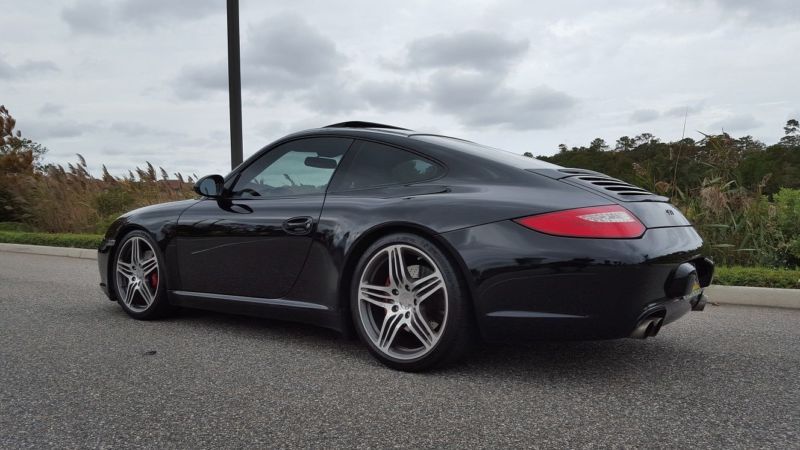 This Porsche was the first Porsche I ever owned as I wanted to see what all the rage was about.
I'm happy to say that I'm hooked. So much so that that I want a GT3 now which is why I'm selling this car.
I will describe everything about this car and it's condition in finite detail so you know exactly what you're
considering.
Exterior:
As you may know, black isn't just a color, it's a full time job.
There is NO rust or oxidation on the paint at all.
Exterior is black and has a few chips here and there on the doors. You see them when you are up close to the car
but not from far.
On the passenger side there is a scratch in the paint about 14" long that doesn't go down to metal, but I was not
able to polish it out. Again if you're up close you can see it - from afar, you don't see it very well.
I've polished the paint and is very smooth with very little swirling.
The windshield is in good condition with one small rock chip that is smaller than the circumference of a penny on
the driver side.
Interior:
The interior is in excellent condition. The leather seats are in excellent condition. All of the dashboard panels
and screens are in excellent condition. The only area that shows any where is the plastic surround on the shifter.
There are some surface marks on that surround from normal use. It does not look bad, but for sake of full
disclosure, that's the area of wear that I see.
The carpet and floor mats are all in very good condition.
Rear seats are in excellent condition.
More details:
2009 Porsche Carrera 3.6L
-PDK Tranmission (7 speed automatic)
-PASM (Porsche Active Suspension Management) suspension
-Sport Chrono!
-Bose Sound System
-Alcantara (Black) headliner
-19" Turbo Wheels (original to the car from factory)
-OEM Sport steering wheel
Tires:
-Michelin Pilot Super Sport Tires all around (235's in front, 305's in rear)
-Front tires have ONLY 2,000 miles on them
-Rear tires have about 50% tread life left.
Maintenance/Upkeep/Modifications:
-Brand new Bilstein Damptronic suspension installed November 2016
-Alignment done in November 2016
-15mm wheel spacers all around
-H&R sway bars (Front and Rear)
-BMC Air Filters (recently oiled in October 2016)
-XPel full clear bra on hood, front bumper, fenders, rearview mirrors and a strip down each door at the edges
-Tubi exhaust with quad tips (Sounds amazing - quiet at cruising speeds with no drone)
-Water pump replaced at 40K miles
-Spark plugs replaced at 45K miles
-Brand new OEM rotors and brake pads installed at 50k miles, including fluid flush and change to Motul 660 brake
fluid
-60K service performed, including PDK fluid change and drive belt change at 53,000 miles (March '16)
-Coolant cap changed to the newer version
Note: The only STOCK parts that will come with the car are the stock springs. I do not have the stock exhaust.
Will perform oil change and smog before turning the car over to you.
Clean title in hand, ready for it's next owner. I also have the complete carfax available to share - i've included
an image in the pictures within this listing to show that it's got a clean carfax.
I'm happy to show the car in person to anyone near me in the San Francisco Bay Area.