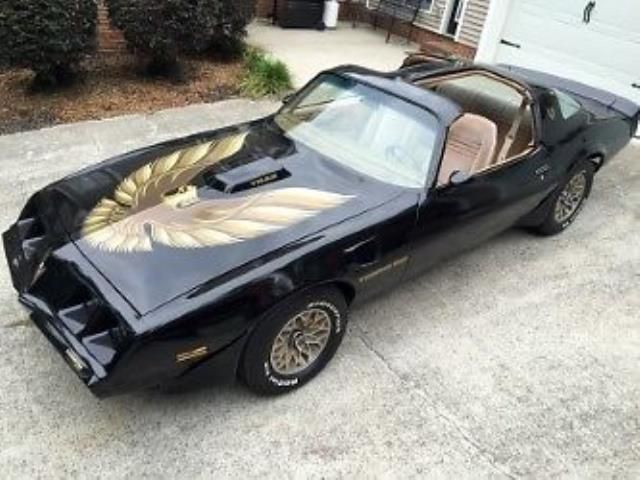 For more details eMail me : andersonlakeannk@yahoo.com

1980 Pontiac Trans Am Paint codes correctly note the car as Starlite Black, Tan interior “W” code car notes that the vehicle originally had a 301cc engine. Engine has been replaced with a 1980 Camaro Z28 350cc and a freshly rebuilt TH350 transmission. The engine has a mild performance cam, aluminum Performer intake manifold, and a Holley 650 carburetors that was rebuilt by Midas in Cleveland TN in April 2016. The engine has long tube headers and true dual exhaust with the original factory stainless dual tips. It has a new master cylinder and new brake booster. Midas in Cleveland TN installed new brake pads on it and the brakes function very well. The vehicle has a new steering box, and this means that the vehicle steers very well, with very little “slop” compared to many with the original steering boxes. The car has new paint, which I would rate as fair to good because a close inspection will note some sanding marks especially on the hood. The graphics are all new including the bird on the hood, which is actually a 1979 bird because many did not care for the original 1980 bird. It has new weather stripping from the t-tops down. Also, new headliner and rear package shelf cover. The dash has a new dash cover which covers all but one dash imperfection, which can be seen close to the radio. As pictured, this car had the unusual factory option of cruise, although it does not currently function. It has new door panels, new seat foam and fabric(the seats were taken apart and new fabric installed. This is not just a cheap slip on cover). New carpet in cabin and in the trunk. The original jack complete with the “bumper guard” are present. The original t-top covers are present in the trunk along with the complete jack assembly. The gauges light up and function, although the cabin light switch must be switched on in order for them to be on. Also the guage lenses are a bit fogged as is common with this vintage. The wiper motor and blades are new and function perfectly in the high and low settings. The headlights work but the brights do not. The car has spent its life in central TX and the previous owner was quick to point out that the car is rust-free. I climbed under the car with a flashlight and looked in the usual places especially in the doors but I have currently not found ANY rust. You could look a long time and not find a car this RUST FREE. The snowflake wheels are in overall good condition, although a close inspection will note areas of the paint have been repaired with fair results. The snowflake wheels have new center caps which look very nice. The front windshield is new and free of scratches. The t-tops functions well and can be put on and taken off with relative ease. There are some small scratches, especially on the driver t-top, but are not seen from a couple feet away. The vehicle is free of dents, however, a close inspection will note small dings in doors. The side lights and brake lights work properly. The turn signals work properly however, the left blinker indicator light on the dash does not function on the dash. Both window motors were replaced in April 2016 and the windows go up and down perfectly. The interior is overall in very good condition. The cabin light is wired but is not currently hooked up. The heat and air do not currently function, although the condenser and heater core are present on the vehicle. The previous owner told me that the heater core had been pressure tested but I have not been able to corroborate that. The car runs and drives well. I drive it to work once a week or so. The motor really sounds nice and the car draws onlookers at most stops. The title is clean and clear and in hand.