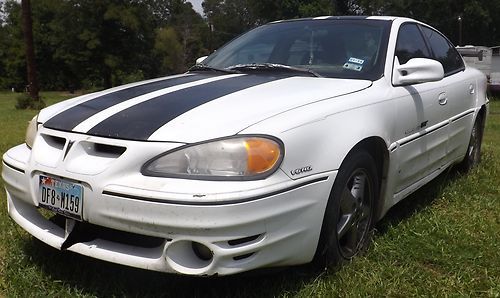 Condition: UsedA vehicle is considered used if it has been registered and issued a title. Used vehicles have had at least one previous owner. The condition of the exterior, interior and engine can vary depending on the vehicle's history. See the seller's listing for full details and description of any imperfections.Seller Notes:"See below"

Black Racing Stripes from hood to trunk
Sunroof
Cruise Control
Carbon Fiber Fin
3" Cool Air Intake
This car needs a new head gasket, fan shroud and ac coil.  There are also minor scratches around the exterior with one major one on the driver window pane*.  The ground effects are split under the front bumper*.  The AC condenser is good.  The dashboard is curled and there are a few minor tears in the seats*.
This listing is also posted locally and may be terminated if the vehicle is sold by a
source outside of Ebay.  You will be responsible for obtaining the vehicle at your expense (I will not deliver it).