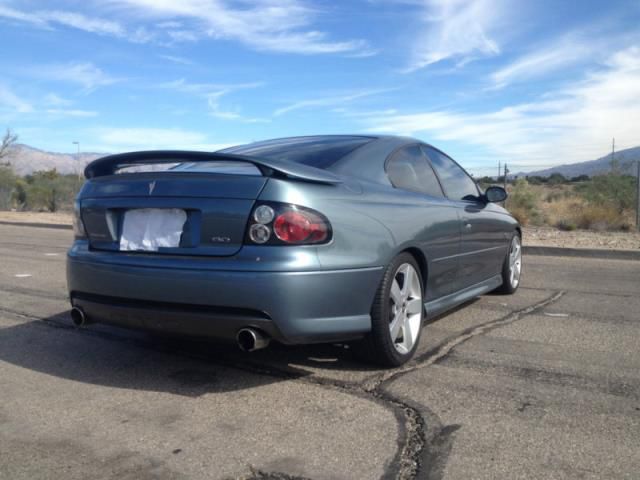 This is the one you've been waiting for!!!! Less than 40k miles Stock untouched motor and tranny King Springs (The ONLY progressive rate drop springs to use on these cars, imported from Australia, has a slightly stiffer than factory ride), 460 from JHP Extra set of BRAND NEW rear King Springs, 280 from JHP K&N CAI JBA Exhaust (Really nice growl as RPM's increase, nice burble when compression braking, absolutely no droning -extremely quiet- while cruising down the highway), 40-3110, 550 from JEGS GMM Ripshifter, installed (hands down, the best shifter ever made for these cars, imported from Australia), 40202, 477 from JHP Original shifter, not installed Royal Purple fluids (Rear differential and transmission) JHP Gauge Pod 34405R(factory wiring harness equipped), 679 from JHP Factory cover where the gauge pod is now Pedders HD strut bushings and bearings installed (Replacements for the notorious stock bushings that collapse) Pedders poly radius rod bushings installed (Stiffens up the caster when accelerating and braking, a must for these cars) Predator Diablo Tuner Infinity speakers (All door speakers replaced, original stock stereo and subwoofers remain, sounds MUCH better than stock) 18" factory wheels Factory SAP grill (Yes this an OEM part, good luck finding one cheap ANYWHERE!) Continental Extreme Contact DWS tires with LOTS of life left (Very quiet, sticky tires with a long wear life) Sales brochures from 2004, 2005, 2006 and paint samples Two sets of keys, each with the glove box key Original lugnuts with factory plastic covers LS2 T56 6 speed Cyclone Grey Metallic High book on this car is 15,900. There is well over 3000 just in extra parts that comes with it. Do the math. This is a good deal. Overall, I rate this car at a solid 9.5 out of 10. It's not perfect, but with the low miles it's the nicest example I've seen for quiet some time. I have taken excellent care of it and never raced or abused it. I would drive this car anywhere at a moments notice, it's just that reliable. I purchased this car from the second owner in Houston, Texas with 14,900 miles on it. If you want an unmolested example of the best of the modern GTO's then look no further. All of the upgrades are simply to make the car drive and ride better (like it should have from the factory) while still keeping it as close to original as possible. I'm not driving it, but I do have the car for sale locally and might put a few more miles on it for test drives and such.