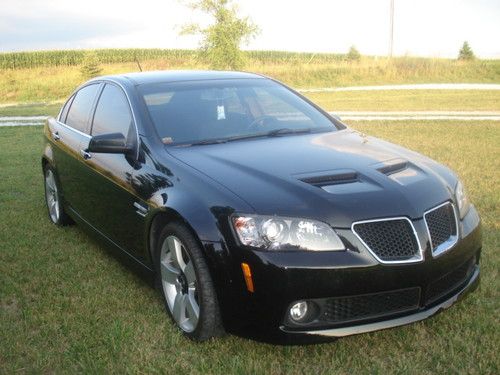 I have a 2008 Pontiac G8 GT 6.0 V8 ENGINE  with 54,000 miles,  all power, leather, 19" wheels , Black in color all black interior, Tires have about 35% left of them, Magnaflow exhaust catback only sounds really mean i also has my old ones if customer decides they don't want the exhaust i can remove them and put the stock ones back on. This car substained and light front end damage had my friend back into me only the fender and headlight got damaged headlight can be still fixable the cover came unsealed on top of the headlight bumper has couple light scratch by the fender that got hit, also the rear sub frame needs to be replaced i took it in for alignment because my back wheel was a little off and the shop told me the sub frame is bent parts for the sub frame is $450 at a local junk yard here in Lincoln to get it replaced runs $500 here at a Certified body shop call Olston's Auto Repair they quoted me on that price. so all together your looking at a $1,500 in the repairs, Car comes with a PREVIOUS SALVAGE TITLE, AS-IS NO WARRANTY . Car still drives has no lights on the dashboard all airbags are intact no check engine light everything works as it should  but its best to get the sub frame replaces the car drives strait tranny is really smooth does't jerk or anything like that. Iv tryed to explain everything about the car if you have and other questions please feel free to Contact me: My name is Vick my phone number is 402-310-7932 Call or text. Thank you and good luck bidding.