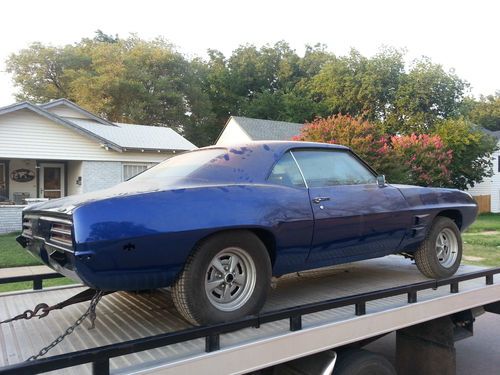 Condition: UsedA vehicle is considered used if it has been registered and issued a title. Used vehicles have had at least one previous owner. The condition of the exterior, interior and engine can vary depending on the vehicle's history. See the seller's listing for full details and description of any imperfections.Seller Notes:"1969 Firebird 400 HO/Ram Air III project car. PHS Documented, This car was an original option King! see copy of build sheet. "US Military Soldier" found & Brought back from Europe. Some of the cool options "are missing" as my reserve price reflects, however the original fold down rear seat is basically perfect, the original power windows are all there. The Deluxe Dash bezel is uncut with the power ant. switch still there. The original radio,8-track,wood wheel, & power seat tracks were gone when I got the car. Car Has a nearly new 12 bolt Posi with Eaton TruTrac 373 gears, Strange Axles. Car has had the frame off & has had the floors sprayed, car was painted overseas & I have no idea what the paint code is. Car is straight & solid. 0-Rust as far as I can see. More pics on request. In person inspection is recommended. try to answer any questions. Car is available for inspection before you bid."

1969 Firebird 400/335 HP HO/Ram Air III Auto, PHS Documented 1 of only 499 built. "Not A Trans Am"  ***NOTE*** This is a Rare Option King! Base model firebird cost  around $2300. The Trans Am cost was $725.00 over that. This 400 HO special order car was shipped to Germany. Special ordered in 1968 from Myrtle Motors in New York came in @ a whopping $4851.81. In 1969 money that was more than a COPO, Yenko, or an L88 or any of the 8 Trans Am Converts. This car has had resto started & is not complete or finished. Was Frame off rotisseried & painted in Europe. The soldier that owned this car was wounded & received the Purple Heart while this car was in the middle of being restored. At that time the car was hastily bolted together. (subframe & front clip) so the car could be shipped back stateside as he was coming home. some of the cool options & parts never made it back, as well as the driver side fender got damaged in transit. The windows were taped up with plastic & the car was placed in a storage container. The port of entry was Florida. When I found the car  it still had port of entry decals on the windshield. I have the European Registration & papers as well as a current Oklahoma Title for the car. This car is worthy of a complete resto & deserves to be put back in its original state of glory. There is no rust in the trunk or anywhere that I have found. if you want to see specific pics let me know. thanks. Car is missing the original Hood Tach & front clip. It has a Trans Am Hood with no hood tach also has TA front fenders & extractors. Drivers side fender was damaged in shipping it has a crack where the fender meets the door. the extractor is in the trunk  I also have nice turbo 400 crossmember & driveshaft both very nice & painted, 12 bolt posi 373 gears with Eaton TruTrac & strange axles, Slide a link traction bars, the original shifter & plate, the cowl piece is painted as well. also have the lower ram air air dam or spoiler for the front, the original rear bumper as well as a new rear bumper.The dash bezel is uncut & very nice. I simply cannot put my 572 chevy in it. It does not have & appears to have never had subframe connectors. it should be put back Pontiac powered. I reserve the right to end auction @ any time. car is advertised for sale locally.