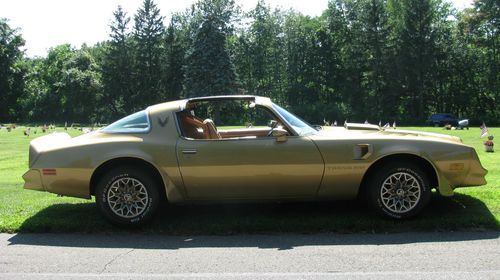 This is a 1978 (gold) Pontiac Trans Am.   I believe it has the original Pontiac 400 engine and at some point it was rebuilt.  Runs very well.  Body has a very nice paint job.  There are three (3) spots that would need repaired - you can see them in the pictures.  The interior is in very good condition.  Power door locks and air conditioning does not work.  T-Tops do leak some.  For additional questions, please call Cliff at (814) 580-7266 or e-mail me at jessicahon@aol.com