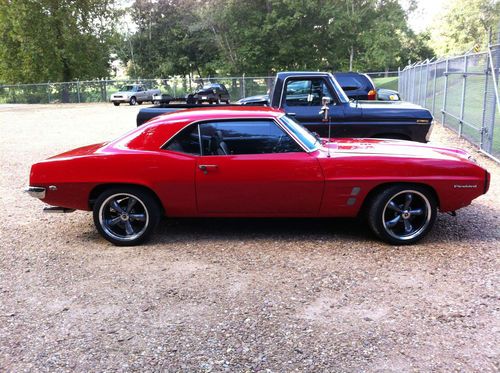 Condition: UsedA vehicle is considered used if it has been registered and issued a title. Used vehicles have had at least one previous owner. The condition of the exterior, interior and engine can vary depending on the vehicle's history. See the seller's listing for full details and description of any imperfections.Seller Notes:"CAR IS A NICE DRIVER, HAS NEW ENGINE AND 4 SPEED TRANS, PAINT IS SLICK, WHEELS AND TIRES ARE NEW, EXHAUST IS NEW, GLASS IS NEW, THE CAR DOES HAVE SOME FLAWS IN THE PAINT AND THE FLOORS NEED SOME WORK TO BE SHOW QUALITY."

I BOUGHT THIS CAR RECENTLY AT A AUCTION, THE CAR HAS LOTS OF NEW ITEMS, THE GLASS , CHROME, WHEELS, TIRES, EXHAUST, MOTOR, TRANS, RADIATOR, AND LOTS OF NEW SHEET METAL, THE CARPET IS ALSO NEW BUT IT WASN'T INSTALLED PROPERLY AND SHOULD BE REPLACED, THE FLOORS WHERE NOT REPLACED THEY WHERE REPAIRED, THAT'S FINE FOR A STREET DRIVER BUT IT DOSN'T SHOW WELL. THE ENGINE IS VERY TIGHT AND HAS A SMALL CAM AND PLENTY OF GOOD SOUND, 4 SPEED TRANS WITH A HURST SHIFTER, SOME OF THE GAUGES DO NOT WORK PROPERLY BUT ALL LIGHTS WORK FINE, IT HAS A AUTOMATIC FAN ON A NEW RADIATOR, THE PAINT HAS SOME FLAWS THAT SHOW UP IN THE GARAGE MORE SO THAN OUTSIDE, IT APPEARS TO BE WHERE SOME TYPE OF REPAIR WAS DONE, THE PAINT HOWEVER IS VERY SLICK NO DINGS OR DENTS. PLEASE EMAIL ME FOR MORE INFO, I HAVE 3 CARS THAT I'M SELLING, TRYING TO RETIRE. THANKS FOR LOOKING.