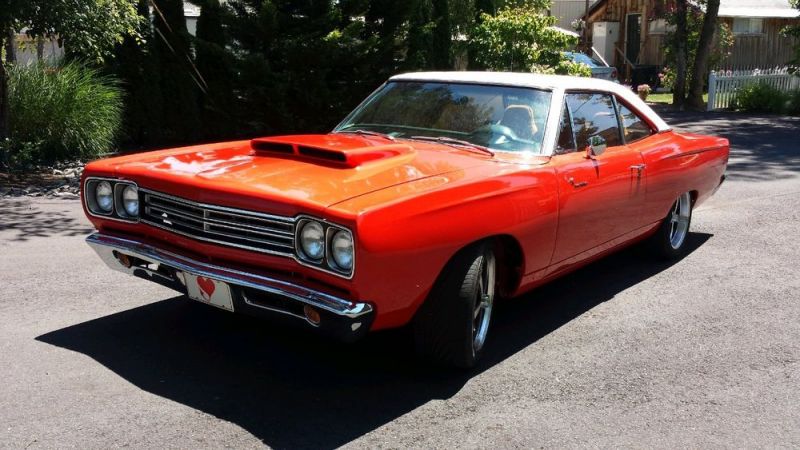 Send me an email at: trudietkkrawchuk@southamptonfans.com .

For sale is my 1969 Roadrunner, nut & bolt rotisserie restoration with lots of custom touches, some subtle, some
not so subtle. 472 dual-quad Hemi, dynoed at 565 horse, 565 torque. Center force clutch, Tremec 5-speed trans,
Dana 60 rearend with 3:73 gears. Wilwood four-wheel disc brakes with Wilwood master cylinders and proportioning
valve. Hydraulic clutch, complete Hotchkis pro-touring suspension with Bilstein shocks that were recommended which
are supposed to make a Roadrunner handle as good as a Viper. 17-inch wheels, 275's on the front, 315 tires on the
rear. The color is factory performance red. Custom interior with custom dash with Classic Industries gauges,
Vintage Air, four bucket seats, full length console, Garrett leather. The white on the top as well as the interior
is alligator. Plymouth emblems embroidered in seat headrests. Trunk upholstered to match the interior. Engine
compartment is cleaned up with hidden electrical as well as plumbing for heat and a/c.
The air cleaner is now chrome, no longer orange. March serpentine belt system. Fiberglass hood. Shaved
and tucked front bumper from a '68 Coronet. Rear bumper is from a '68 Roadrunner with the exhaust moved up and
exiting through the bumper which is shaved as well. Again, too much to list here on a no-expense-spared build.
You will not be disappointed!