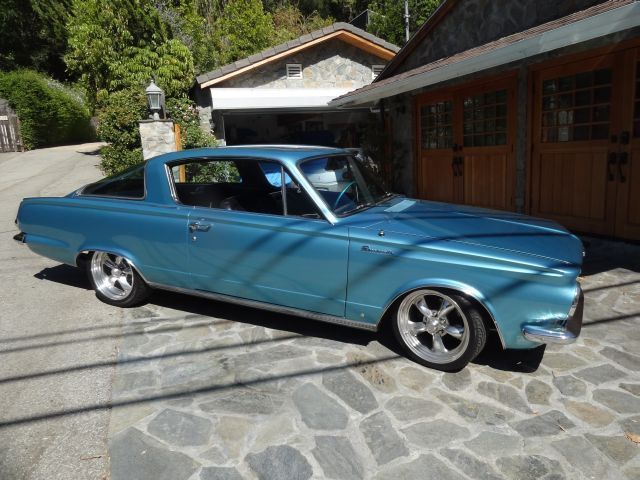 1965 PLYMOUTH BARRACUDA
For sale is a 1965 Barracuda. The car is California rust free car, has a clear title, currently registered. The
Barracuda has undergone an extensive restoration with most of the work being completed between 1998-2004, including
an upgraded 360ci.
The classic fastback body is straight, and rust free. The undercarriage is clean, and coated. The Blue paint was
done about 8 years ago, Car has been garage kept since paint job. A few minor scratches that could probably be
buffed out. All the glass is in great shape, including the large rear glass. All weather stripping was replaced
when the car was repainted. The Barracuda now sits on a set of 17 inch American Racing Sport Chrome wheels with
good sport tires with plenty tread. All the chrome is original, and is in good driver condition.
The seats, carpet, door panels, and trim are in excellent condition. The original headliner is good but the dash
has a small crack. All windows work properly. All gauges work properly.. The speedometer does not display accurate
speed. Excellent folding rear seat, with new carpet in rear.
The Barracuda is now equipped with a 360ci engine from a '78 Dodge. It was rebuilt and equipped with new Edelbrock
intake and a Holly 4 barrel carburetor. The engine has from all accounts 20K miles on it since rebuild. The
original auto transmission has been rebuilt also about 10 years ago.
Here's just some of the Major UPGRADES this car has:
Edlebrock Manifold
Poly graphite Super Front End Kit/ Front Disc Brake Conversion, Sway Bar, Tie Rod, Bushings, Brake Lines,
Calipers, Etc, (2004)
Fuel Sending Unit (2002)
Chrome Alternator (2002)
Holly 4 Barrel (2000)
Aluminum Radiator and Fan (2010)
Crane Cam & KB Performance Pistons (1999)
17 Inch Chrome American Racing Wheels
Carbon Fiber RPM Gauge, Oil Pressure Gauge and Water Temp