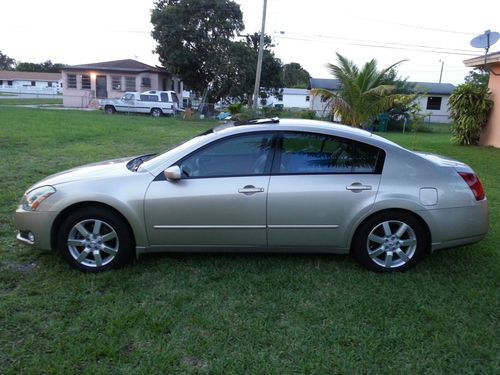 Condition: UsedA vehicle is considered used if it has been registered and issued a title. Used vehicles have had at least one previous owner. The condition of the exterior, interior and engine can vary depending on the vehicle's history. See the seller's listing for full details and description of any imperfections.Seller Notes:"Car is in good condition. The leather inside is in great condition with with only minor scratches. There is a small tear in the leather of the driver seat (see pics). The exterior paint is in good condition with normal wear and very minor scratches. There are no dents i can identify on the vehicle. Overall the condition is good (no major issues)."

This a a great car that runs and drives awesome. It has full power (when you lower your right foot there is a brisk response). Overall condition of the car is good. 2004 Nissan Maxima SL, 113k Miles, Clean Car, Clean Title, 3.5L V6, Tan Leather Interior, Sunroof, 6 Disc in dash CD Changer, Bose Audio, Cold AC, Heated Seats, car is well maintained, has all books and records. Runs beautifully. Asking $6500 obo. Call, Text or reply to this message for more pics. As for Andrew, 305 791 0949