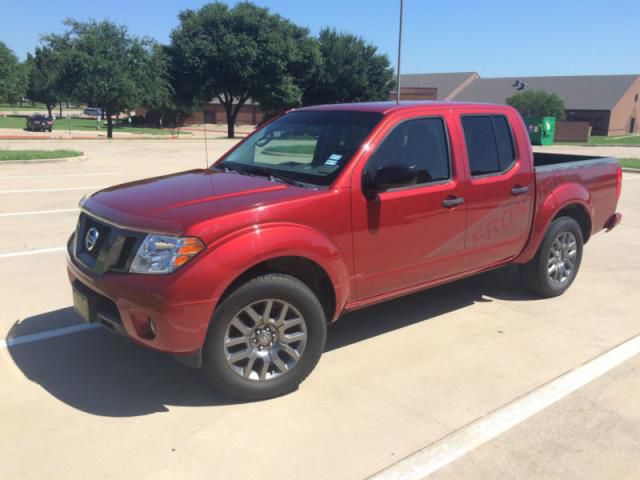 A 2012 Nissan Frontier SV Sport Appearance with approximately 31K miles on it. In great running condition. History: This is a one owner vehicle. Unfortunately, the previous owner passed away and I am selling this vehicle on behalf of a family member. A bug deflector, trailer hitch, and a XM Satellite Radio Receiver (along with it accompanying power supply) were added to the vehicle. Key Features V6 4.0L Gas Engine w/ Automatic TransmissionCruise ControlTrailer HitchA XM Satellite Radio Receiver has been added A Bug Deflector has been added Bluetooth Hands-Free Phone System18 Alloy Wheels with Dark Hyper Silver finishPower Windows, Power locks, Power Mirrors AM/FM/in-dash 6-CD audio System Cosmetic Condition: The truck is in great condition with only minor blemishes. There are a couple of small minor dents on tailgate. There is also a small dent on the bottom part of the second driver side door. There are also a couple minor paint blemish (slight discoloring in the paint) throughout the vehicle. The interior also has a couple of small stains/blemishes. There might be other small blemish on truck but I have tried to list them all here. Thanks for looking. If you have any questions please feel free to contact me.
Please contact me only at : fifinei1moselle@laposte.net

This is the Alpine LMP2 competitor you'll see contesting European endurance races this year, including The 24 Hours of Le Mans in June. Parent company Renault showed off the N36 racer at its atelier in Paris, the blue and orange a switch from the yellow, black and white livery Alpine wore last time it was seen in Le Mans way back in 1978 when it won the race.
The team will be run by Signatech-Nissan and the chassis will be powered by a Nissan engine. Nelson Panciatici and Pierre Ragues will contest World Endurance Championship rounds throughout the year, they'll be joined by endurance and IndyCar veteran Tristan Gommendy for Le Mans and Paul-Loup Chatin as the team's reserve driver.
The Alpine N36 will get into its first test this week at Paul Ricard, then experience its first racing miles at the European Le Mans Series round at Silverstone on April 13. The press release below has the full scoop, the photos above have the past and present in high-res glory.