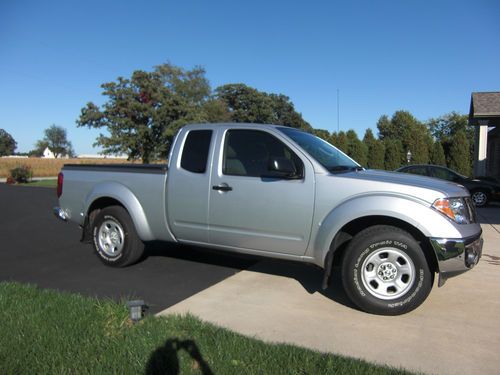 Condition: UsedA vehicle is considered used if it has been registered and issued a title. Used vehicles have had at least one previous owner. The condition of the exterior, interior and engine can vary depending on the vehicle's history. See the seller's listing for full details and description of any imperfections.Seller Notes:"Like new condition. LOW,LOW miles."
LIKE NEW VEHICLE
LOW,LOW, MILES
I am selling this truck for my father, as he can no longer drive.
2008 Nissan Frontier 4X2 King Cab SE 4-Cylinder
13,617 Miles
Tonneau Cover
Ext. Radiant Silver
Int. Graphite
2.5 Liter 4-Cylinder
Like new condition, with chrome front grill and chrome front and rear bumper, privacy glass,sliding rear window, reclining front bucket seats,fold down front passenger seat,digital clock,two 12-volt power outlets, front and rear door pockets, floor mats,and forward facing rear flip up seats.
There is a small dent (hardly visible) in the driver side front wheel well, a few touched up paint spots in front of the wheel well and a light scratch on the drivers side back panel as shown in the pictures, other than that, it is in great condition. The interior is in great condition, no rips or tears in the fabric.

The Nissan Pulsar doesn't have what we'd consider a rich history in the US, other than on some models decades ago. However, the nameplate has been part of the Nissan lineup globally since 1978 and has proven popular in Asia and Australia. Now, the brand is teasing a five-door hatch to revive the name and hit European showrooms this fall.
The new Pulsar will be built at the company's recently renovated factory in Barcelona, Spain. It's not clear from the teaser whether this is the same model that is already sold in other parts of the world or a brand new vehicle. Although, Nissan says in the announcement that the car "has been designed to meet the specific demands of European car buyers."
With competitors like the Volkswagen Golf and Ford Focus, the European five-door hatch market is seriously competitive. It will be interesting to see if Nissan will have something special to bring to the table. Scroll down to read Nissan's full teaser about its latest hatchback in Europe.