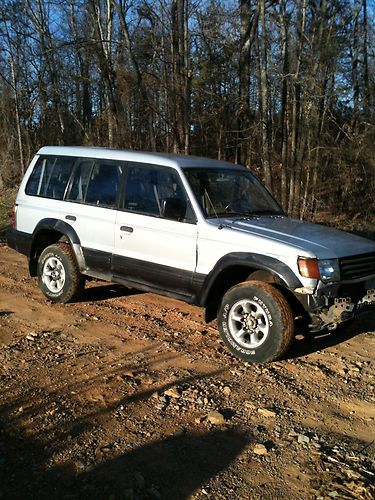 Up for auction is a 95 Mitsubishi Montero 4-door 4x4. NO RESERVE!! Seats 7. Has front, middle and rear seating. Small back storage. Runs and drivers. Automatic lock in hubs controlled inside cab. 4 wheel drive works good. Electric control shocks. Horn, and turn signals don't work. Needs turn signal switch on collumn replaced and turns signals and headlight dimmer will work. Needs a front bumper. Has some body dents and paint is faded in some areas. Windshield is cracked. Leather seats are cracked in front, carpet has stains. Would make a great hunting rig or just an every day driving rig. LOCAL PICK UP ONLY!!

Mitsubishi Lancer Evolution will live through 2015

If it were only so easy for humans. Mitsubishi has extended the life of the Lancer Evolution X by at least a year. An MMNA spokesperson tells AutoGuide that it is "committed to introducing the 2015 model year Lancer Evolution," noting that production for said models will begin in July. This gives us a year of clarity about the future of a model whose future blinks in and out of existence quicker than a boson particle.
As far as we can tell, the Evo as we know it is definitely going to die, the question is when. In March, Mitsubishi said it "does not have any plans to design a successor with the current concept, as a high-performance four-wheel drive gasoline-powered sedan." What is rumored to fill the hole left by the Evo might or might not be a linear descendent, but is expected to be some kind of hybridized high-performance model about which much has been speculated.
MMNA PR manager Alex Fedorak told Autoblog, "Mitsubishi Motors North America, Inc. (MMNA) is committed to introducing the 2015 model year Lancer Evolution in the U.S. Production of North American-specification Lancer Evolution models for the 2015 model year will commence in July 2014." Our previous advice still stands, however, even with the extension: If you want one, get an Evo while you can.