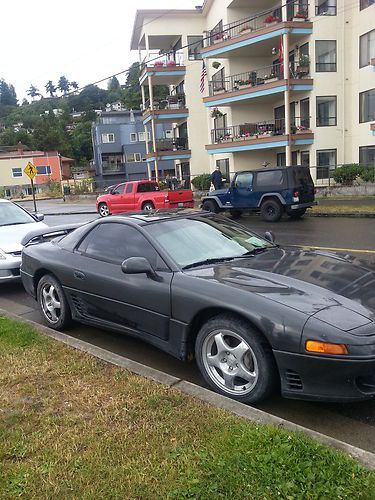 Condition: Used: A vehicle is considered used if it has been registered and issued a title. Used vehicles have had at least one previous owner. The condition of the exterior, interior and engine can vary depending on the vehicle's history. See the seller's listing for full details and description of any imperfections. ...
Im parting with this diamond in the rough. the car runs good and pulls strong. it needs some TLC .has some cosmetic issues. seats are ripped.front fender needs repair.all the dust included!sport light flashing indicating strut is bad.im pretty sure its the rear drivers side because theres a very minor squeak occasionally.i do have a service record i found in the car when i bought it, states engine is out of a 95 or 97.when i bought the car it ran rich.i took it in to a master tech in bellevue and now its runs clean with a ton more power.i believe they replaced some air hoses.i have those records somewhere.it does have a low idle if not fully "warmed up" .i just recently noticed on the carfax that the car has discrepancies with the odometer.i do not know if the odometer has been tampered with or if the dash has been replaced.either way,i dont know the exact actual mileage.the title is REBUILD.theres oil on the block by the oil cap.but does not burn a ton of oil.when i was driving the car i would top it off at oil can henrys once a month with full synthetic and it was never more than a quart low.this car needs your love and is ready to be tuned up and tuned in.i really wish i had the time and skills to play with this machine.ill even offer your money back if youre not happy with something other than something i mentioned.im also thinking about making a video of the car so let me know if thats something youre interested in.this car does have its issues but im confident you can drive this car back home.or you can arrange shipping. NO RESERVE!! starting at a penny! GOODLUCK !
5094260977