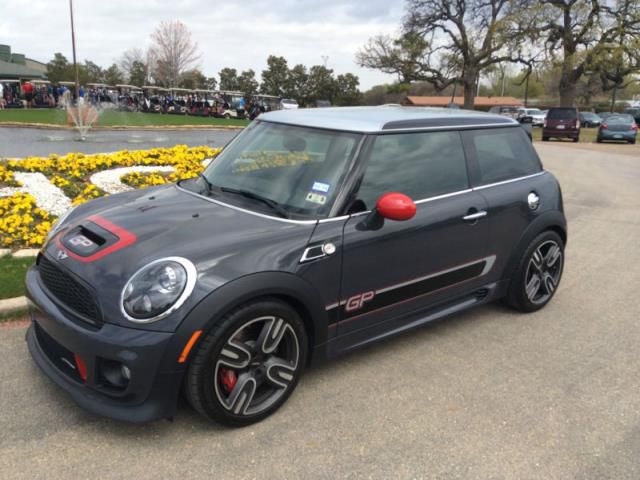 This Second Generation "GP" Limited Edition Mini, with the first generation being the 2006 model. There were only 2000 produced worldwide in 2013, with only 500 brought to the Untied States! Simply put, the GP is the John Cooper Works Package on Steroids and is the fastest Mini ever produced to date. Upgrades from the JCW include; 17 inch brakes, 6 piston calipers, vented rotors, adjustable coil over suspension, and with fifty pounds less overall weight helps the top speed reach 150 mph! The 1.4 litre Turbo charged engine produces 211 hp and 207 lb/ft. of torque and has a recorded zero to sixty time of 5.9 seconds! Includes; Xenon headlights, Keyless entry, Power outlet, Satellite radio, Ipod port, Carbon Fiber rear Spoiler, Sport button, Recaro heated sport seats finished in red stitching and manual 6-way adjustment, Bluetooth, CD audio system with AM/FM HD Radio and auxiliary input, Cruise Control, Power windows, locks & mirrors, on board computer, Multifunction Steering Wheel, Fog Lamps, Tire Pressure Monitor, 215/40R17 Tires, six airbags, including side curtain airbags, tilt wheel and automatic climate control. The GP also comes with wight optimization via deletion of rear wiper, speakers & seats, a specially developed GP-Mode Traction Control System, front suspension cross brace and adjustable front and rear coil-over suspension with multi-link rear suspension. Includes both sets of keys, original books and window sticker($39,950), the original 0478 sticker if you decide to put it on the vehicle, and both the original floor mats and a set of all weather rubber mats too! Number 478 of 500, this also offers a clean car fax, and no previous body damage or mechanical issues. This vehicle is an upgrade from the John Cooper Works package, is extremely rare, and is a non smoker vehicle. Selling for $7,000 less than MSRP with only 2,402 miles! No extended service policy needed! Remainder of 4 year/50,000 mile New Passeng Car Limited Warranty plus the remainder of 3 year/36,000 mile