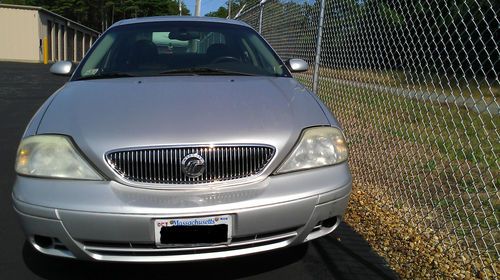 UP FOR ACTION '04' MERCURY SABLE LS. THE CAR HAS 108K POWER EVERYTHING INCLUDING SUN ROOF LEATHER SEATS, AS YOU CAN SEE IN THE PICS INSIDE NEEDS A CLEANING BUT IS IN VERY GOOD CONDITION. THE TIRES HAVE 85 TO 90% TREAD FRONT BRAKES ARE NEW MAY NEED REAR BRAKE SHOES THEY SQUEAK SOMETIMES. THE ONLY RUST IS IN PICS BY THE REAR PASS SIDE WHEEL
UNFORTUNATELY THE CAR WILL NEED TO BE TOWED, SOME METAL TUBING FOR THE COOLANT SYSTEM BLEW OUT AND OVER HEATED THE ENGINE ( SO THE FORD DEALER TOLD US). THEY QUOTED AROUND 4500 FOR ENGINE REPLACEMENT W/ WARRANTY. ROBERTSON'S A LOCAL SALVAGE YARD TOLD ME $450 FOR A USED ENGINE WITH 68K ON IT AND A LOCAL MECHANIC QUOTED ABOUT 1100$ FOR LABOR. OR AROUND 2500$ QUOTE FROM A ENGINE/ TRANS SPECIALIST WITH A NEW REBUILT ENGINE . IM PUTTING IN ALL THESE OPTIONS BECAUSE EITHER WAY ITS A WIN WIN FOR ANYONE WHO WINS THE BID THIS IS A GREAT CAR FOR A GOOD PRICE. EVEN IF YOU HAVE A NEW ENGINE FROM FORD PUT IN YOU WILL STILL ALL TOGETHER BE PAYING A LOT LESS THAN KBB    ANY QUESTIONS PLEASE ASK VERY LOW RESERVE
THIS IS CASH ONLY DEAL CASH IN HAND AT THE TIME OF PICK UP TITLE IS IN HAND NO SHIPPING LOCAL PICK UP ONLY THANK YOU