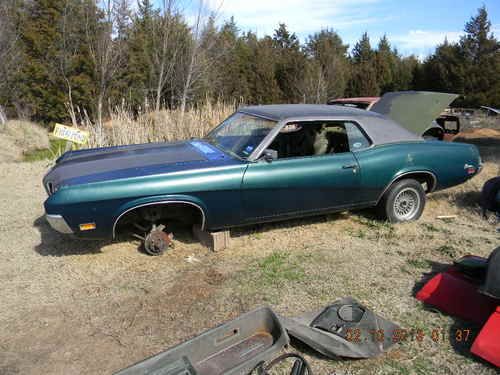 Hello; Up for auction is a 1970 mercury cougar. It will need a complete restoration. I do not have a title for the car. It has a 351 cleveland automatic w/air conditioning all the pieces are not there to the a/c it appears that everything under the dash is there. The floor pans and frame rails look excellent as you can see by the pictures the trunk floor only has a small hole on drivers side by the plug. The drivers side rear quarter has a small rust hole. The pass. side needs quarter repaired and it will need a door. The drivers door glass is missing but does have regulator in it. The quarter glass is also missing but the rest of the glass is there. I do have both upper and lower back seats. I was told that the motor and transmission ran great but I am not sure it does turn over ok. There is no radiator or brake booster also the steering gear box is missing. It does have the reinforced shock towers. It will need the brake calipers also. The rear end was changed out to an 8". It appears to have new dual exhaust. I do have the front rims and tires also. Can help with shipping if needed. Thanks and Happy Bidding