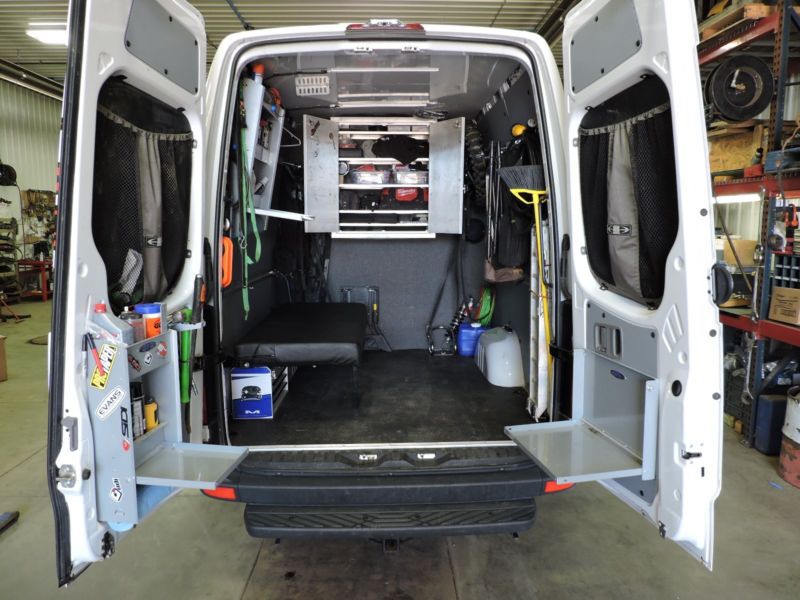 Just email me at: malcommbbibee@clubmclaren.com .

This van was purchased for my personal use. I outfitted it with many items from RB Components. Van is full
insulated, aluminum ceiling kit, subwall insulated and carpeted. The following are items the van has been
outfitted with
custom leather seats, espar heater, dometic roof a/c, 110v power system(multiple outlets, 1750 watt sine wave
inverter, two AGM deep cycle 950cca batteries, shore power plug under drivers side of van, aux 12 volt outlets usb
and cig outlet), 7" Alpine deck(back up camera, dvd/cd/Bluetooth/aux usb/Pandora ready/Sirius radio ready), all
speakers in dash and doors changed to MB Quart. 15" Rockford sub, excellent built in navigation system. The roof
air unit is run off of a generator or shore power(cord included and adapter for most camping hook up). Grill guard
up front with an LED light bar. Rear step bumper with receiver hitch. Multiple storage cabinets, tv, fridge,
microwave, spare wheel holders in rear. Front has a sofa/couch sleeper that flips up against the wall or out into
a bed or couch. Under the couch/bed is the storage box for the 110 volt system and amps, also plenty of storage
for other items. Above the driver/pass seat is an overhead storage shelf. In the rear of the van are more storage
cabinets for parts and aerosols/oils, the spare wheel holders are wall mounted, a flip down bed/bench seat, all LED
lighting inside, LED spot lights mounted on top, inside of rear doors. Fiamma manual awning installed on the
passenger side. White in color. In the rear doors are gear bags from RB, very handy for putting dirty gear in.
The front and rear floors of van are covered with TPO rubber flooring which is resistant to nearly all fluids.
Under the rubber floor is the factory wood floor which includes factory installed L-track. The walls also include
two rows of l-track. In the subwall there is a 6" 12 volt fan to help heat/cool the rear of van. New Hankook
dynapro a/t tires put on at 22,000 miles(13,000 ago).
Delivery is available, I am located in SE South Dakota. I travel to all of the National Enduro, OMA Nationals, and
select District 22&23 races.