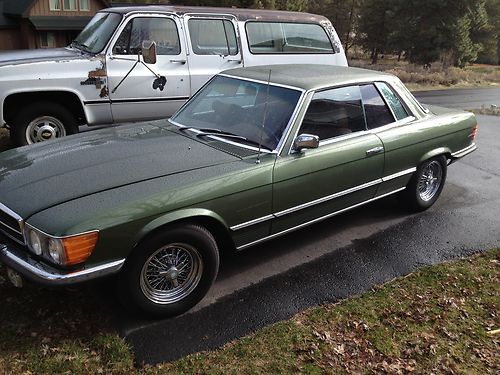 1973 Mercedes 450 SLC, I was told this is rare being stonepine green metallic and the nutmeg color interior. I don't know, but I've never seen another. This color combo with the factory wire wheels makes this car really stand out from your standard silver or gold cars that everyone else has. This has been an Oregon car all its life, so it is mostly rust free, but has a few little spots. You can see the back of the trunk has some bubbles in the paint, I'm not sure why as the inside of the trunk shows no signs of rust at all. The only other spot is under the rear window rubber seal, I don't actually know that it is rusty, but it feels bumpy so I will assume it is, so you have no unknown surprises.

This car runs down the road as it should, it doesn't have tire smoking power from a stop but you could cruise down the highway at 100 all day long. It runs good, I drive it nearly every day. It has a few flaws that I will point out, so again you have no surprises.

The tach doesn't always work, if it works when you start the car it never stops working while driving. I never looked into what the problem may be.

The belt that runs the A/C is off the car, the compressor spins free, but it hasn't had a belt on it since I've owned it. I couldn't tell you why it's off or if the system works or not.

The front seats look like a big butt has smashed them down, they are still comfy to sit in and drive, but for me this was the biggest issue, I think they just look ugly and need redone.

The tires have lots of tread, but the tires are older? weatherchecked looking, fine for around town, but if you want to drive this car home across the country, it would be a safe bet to replace them first.

The paint on the roof and trunk is faded, I would call it hazey looking, it is a repaint from who knows how long ago, it is basecoat and clear on top. A pro might be able to bring it back to life. It still looks good going 100.

The pros with this car...

It's a Mercedes, it is safe, it is fast, and I'm going to sell it cheap!

I think it has some rare options, it has rear armrests, rear fold down center, spectacular color in and out, factory wire wheels!