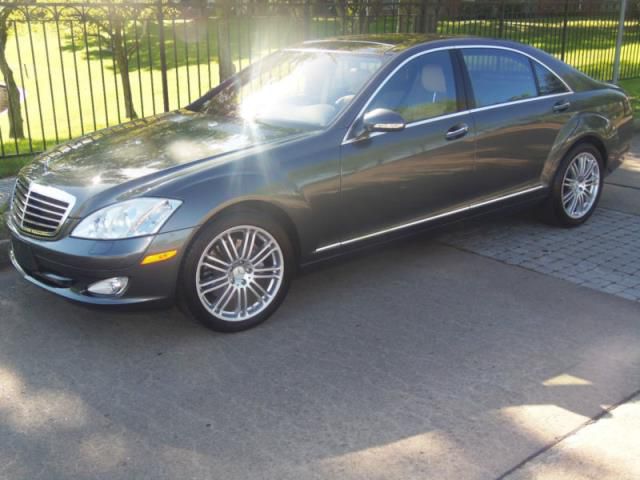 - like new - one owner -Model Overview
The 2007 S550 has a 382-horsepower 5.5L V8 engine, while the S600 gets a 5.5L twin-turbo V12 engine that makes 510 horsepower and 612 lb-ft of torque. The S550's V8 is matched to a new seven-speed automatic transmission, while the S600's V12 runs through a five-speed automatic. All-wheel drive is available on the S550.Both the 550 and the 600 come extremely well equipped with both traditional luxury and comfort features and the latest high-tech safety and driving aids. All S-Class models come with eight air bags.Full leather upholstery and hand-polished wood trim are standard inside the S550, while the S600 gets hand-polished Gloss Burl Walnut trim.One especially notable interior feature is the Dynamic Multi-Contour Seats, standard on the S600 and optional on the S550. In the front seats, 11 individually adjustable air chambers optimize support for your back, even adapting for cornering forces.The standard sound system is a harmon/kardon audio system with 13 channels and 14 speakers. The system is MP3 and DVD audio compatible and also includes a six-disc changer and memory-card reader.The S550 comes with plenty of high-tech equipment, including a navigation system with a built-in 20-GB hard drive, heated seats, special interior ambient lighting, a power rear sunblind, dual-zone climate control, bi-xenon headlamps with active curve illumination, heated washers, and a hands-free communication system with voice control.The S600 adds nearly all the remaining S550 options as standard equipment, including an active night-vision system, dynamic rearview monitor, the Distronic Plus radar-based cruise control system, ventilated Dynamic Multi-Contour seating for the front and back, active head restraints, active body control (ABC), and a panoramic glass sunroof.All S-Class models get the latest version of the COMAND system, a screen-based interface that controls a host of vehicle settings, plus navigation, audio, and climate control functions.The S-Class also gets a new Brake Assist Plus system, which warns the driver of the potential for a collision, then applies full braking through the powerful four-wheel vented-disc system the instant the driver touches the brake pedal; the system also primes the car's safety systems. The S600 is also the first vehicle to be equipped with adaptive LED brake lights that flash rapidly during emergency braking, according to Mercedes-Benz.The S65 AMG is available for performance enthusiasts. Highlights of this vehicle include a bi-turbo 6.0L V12 engine, all manner of AMG enhancements