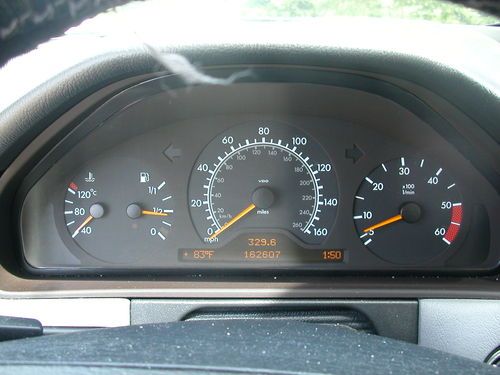 Condition: UsedA vehicle is considered used if it has been registered and issued a title. Used vehicles have had at least one previous owner. The condition of the exterior, interior and engine can vary depending on the vehicle's history. See the seller's listing for full details and description of any imperfections.Seller Notes:"Lovely Driving Car, Got a Few Small Car Park Marks on The Body 1 x Clearcoat Scratch on R/H Ft door About 6" Long Been There From i Bought The Car in July 2007, No Mechanical Issues At All,"

FOR SALE IS A 1998 MERCEDES E300 TURBO DIESEL IN VERY GOOD MECHANICAL CONDITION,LOW MILES FOR ITS AGE AT 162,607 (THIS WILL GET A LITTLE HIGHER AS IT IS IN DAILY USE), I HAVE OWNED THIS CAR FROM JULY 2007 IT HAD 122,099 MILES WHEN I BOUGHT IT UP UNTIL I OWNED IT IT WAS SERVICED AT ARLINGTON MERCEDES IN N.VIRGINIA, I HAVE CARRIED OUT THE MAINTENANCE FROM I BOUGHT IT OIL CHANGED AT 5,000 INTERVALS USING GERMAN OIL/FUEL/AIR FILTERS & SHELL ROTELLA 5W-40 FULL SYNTHETIC TURBO DIESEL OIL, THE TRANSMISSION WAS SERVICED AT 145,000 (NEW FLUID(M.BENZ BRAND) & FILTER, THE DIFFERENTIAL OIL WAS CHANGED AT THIS TIME TOO, HAD A RADIATOR FLUSH ALSO THIS SERVICE WAS IN 2010,

4 X BRAND NEW UNIROYAL TIGER PAW TIRES @ 159000 THIS YEAR
FT BRAKES (PADS & ROTORS) AT 161,000
HAD ITS VA INSPECTION DONE AT TIME OF NEW BRAKES IN MAY 2013 NO OTHER REPAIRS REQUIRED,
THE INTERIOR IS IN GOOD CONDITION NO EXCESSIVE WEAR ON DRIVER SEAT. CARPET-HEADLINER-DASHBOARD ALL EXCELLENT
ALL ELECTRICS WORK AS THEY SHOULD
A/C COLD HAD A NEW COMPRESSOR-DRIER-EXPANSION VALVE & LOW SIDE LINE IN SPRING 2011
WE ARE MOVING TO EUROPE THIS IS THE ONE AND ONLY REASON THIS CAR IS FOR SALE (WE LOVE THE CAR NEVER EVER KEPT A DAILY DRIVER AS LONG EVER BEFORE) THE NEWER ONES ARE MORE COMPLEX TO MAINTAIN REASON WE KEPT THIS ONE SO LONG,
THERE IS A LOT OF YEARS LEFT IN THIS CAR YET IF MAINTENANCE IS KEPT UP I HAVE SEEN TAXI'S (M-B DIESEL) IN EUROPE WITH OVER 700,000 KILOMETERS STILL RUNNING GOOD ON THE FIRST ENGINE  THATS AROUND 450,0000 MILES MOST OTHER MAKES HAVE BITTEN THE DUST LONG BEFORE THAT MILES,
ANY INSPECTION  WELCOME INCLUDING TEST DRIVE
THERE IS A CLEARCOAT SCRATCH ABOUT 5 - 6 INCHES LONG ON THE R/H FT DOOR CK RELEVANT PICTURE A FEW MINOR CAR PARK SMALL DENTS DUE TO AGE, REMOTE KEY LOCKING EVERY NOW AND THEN DONT WANT TO LOCK IT USUALLY AFTER A FEW ATTEMPTS IT DOES WORK,
WITH THE EXCEPTION OF THESE FEW MINOR THINGS YOU WILL NOT FAULT THIS CAR
CALL ERIC ON 540-797-7776 BEFORE 9.00 PM TO MAKE APPOINTMENT TO VIEW
PLEASE BE SERIOUS BEFORE CALLING AND NO LOWBALL OFFERS ACCEPTED
CAR IS IN HARDY, VA 24101 NEAR VINTON & ROANOKE