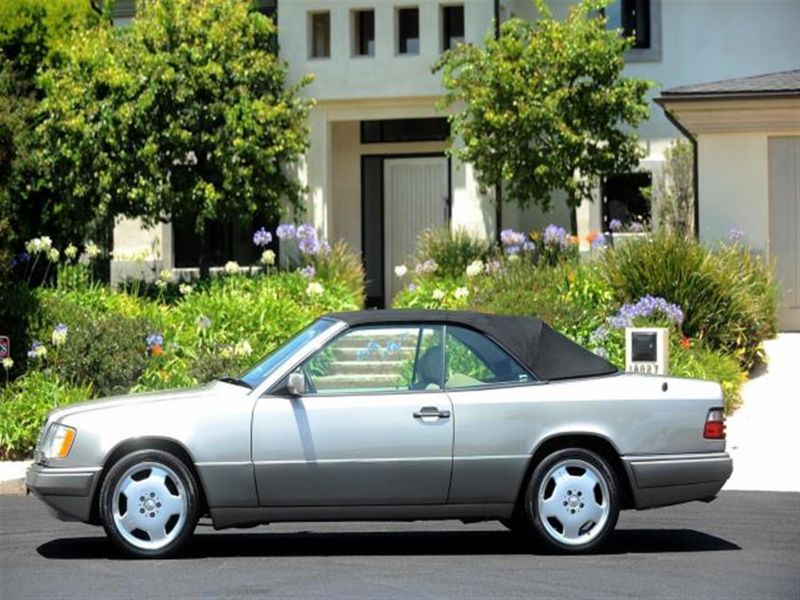 This may be the finest example currently available in California - a last yearof production E320 Cabriolet in an elegant Champagne color ('Smoke Silver")with beautiful condition light Tan ("Cream Beige") interior. This auto has veryLow Mileage and has been cared for meticulously by a California collector andtop local senior Mercedes mechanic who also collects E320 cars. It has recentlynew original-equipment 1995 AMG 17" wheels and tires at a cost of $3,000 alone.Interior improvements include recently replaced headliner, seat upholstery,floor mats, burlwood center glovebox scroll and factory radio refinish by Beckerthemselves - all to Original Spec. The stereo has upgraded Polk Audio speakersunder OEM grills (no visible modification from original) and the upgraded OEMMercedes amp and door speakers. Fully $28K invested in the last 5yrs ofownership, the car is listed at a quite attractive price. This model wasadvertised in 1994-5 by Mercedes-Benz in this color combination, it is atimeless period color and the flagship color of the model's designer, againmaking this particular specimen quite collectible. The original window stickerprice for this example showed over $82K, it is fully-loaded, including theheated seats and too many options and features to list here (doing so isunnecessary for the knowledgeable collector who knows this high-line luxury carwell). It is complete with its factory wind deflector and pristine factory floormats.The car is in excellent condition overall,
For more details eMail me : ThereseIgartuaiixq@yahoo.com