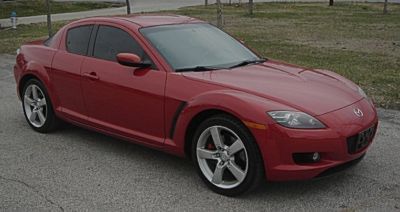 2004 mazda rx8, i have to get what I owe no less,  powersteering works but pretty sure it needs cleaned up dirty connectors.  has a new engine installed by local mazda dealer. has after market radio, and the box that is came with doesn't operate the steering wheel controles, and the on dash display of the temp doesnt work with it, faulty box from metra. also controles for heater and a/c work but dont function due to the faulty box from metra. the cold to hot knob works and the high low knob works, just cant go from vent to feet to center vent, it all works just needs a new box or factory player installed. runs good, shifts good, there are two lights on the dash, the TPMS light, which tells you to check air pressure, well i had the TPMS valves removed and had plain air valves put in place, and the local tire shops refused to turn off the system. and there is a air bag light on it is for the drivers side side curtain bag, took it and had it checked and tested it all works according to local shop.engine has around 8k on engine. tires are in good shape not new but not worn.has aftermarket intake, doesn't do anything for the car but give it the rotary sound. has a new radiator had it replaced about 2 years ago. i have had the car for 4 years and some change. small ding in drivers side rear quarter panel fender over tire. very small and not creased im just broke and cant afford to have it pulled. all glass is good.interior is good.car runs good handles great.  i don't think i forgot anything  BUYER RESPONSIBLE FOR SHIPPING, VEHICLE SOLD AS IS!!!!!!!!!