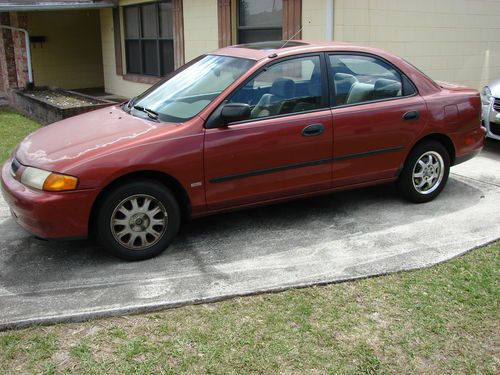 Up for auction is a 1998 Mazda Protege ES. This car is equipped with the rare optional CC L4 DOHC 1.8 L engine. Only 7% of  all Mazda Proteges were equipped with this optional engine in 1998. The car is fully loaded with options, like, automatic transmission, p/windows, p/locks, p/4-wheel disc brakes, p/sun roof, p/steering, p/mirrors, cruise control, rear window defogger, intermittent windshield wipers and a/c. "ALL" of these options work, including the A/C. The car has 147,000 miles on it and I just had a tune up on the car. New plugs, wires, air filter, alternator belt and front 02 sensor. I also had 2 brand new front tires and 2 new rear rotors and brake pads put on the car. The car runs great, transmission shifts smoothly and I don't see any problems driving this car anywhere.

As you can see in the pictures, someone side swiped the car on the passenger side a while back and I never had it fixed. All the doors and windows work fine so I just kept driving it like it is. The Florida sun has faded the finish in different places on the car so please look at the pictures. I believe the reserve is fair for a good running 4 cylinder car with Working Air Conditioning. Please note that I am also selling this car locally so I reserve the right to end this auction at anytime. Also, this car is being sold as is/where is with no implied guarantee. If you have any questions about the car please feel free to call me at (407) 756-5070. Thank you.

Mazda going back to oval grille with next MX-5 Miata

The original Mazda MX-5 Miata was distinguished by an oval grille - a design trait that gradually evolved into the smiling cat face on the latest model. But Mazda, according to the latest intel, is planning on returning to that oval grille with the new model in the works.
The revised grille will cap a slightly longer form than models past, while still keeping weight down to a minimum. The stretched wheelbase was reportedly adopted in order to meet the requirements of Alfa Romeo, which is jointly developing the new platform together with Mazda for use on a new roadster of its own.
The new Miata is expected to adopt the 1.5-liter Skyactiv four found in the Mazda3, albeit returned to rev higher and deliver more power and torque, mated to either a six-speed manual or automatic. The Alfa version, meanwhile, is expected to use a 1.4-liter turbo four with a dual-clutch transmission. Sources anticipate the new MX-5 to debut first, possibly at the 2015 Chicago Auto Show a little less than a year from now.