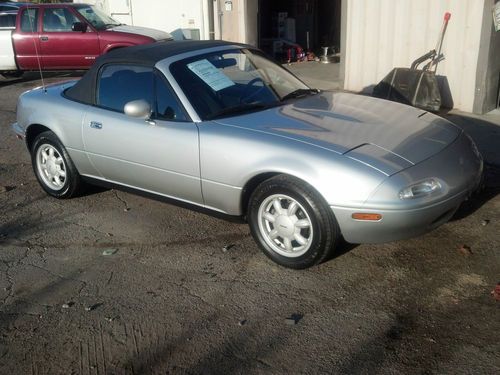 This is one of the nicest 1991 Miatas that I have ever seen. This cars looks like a 2 year old vehicle. This is a one owner car with a clean carfax. This vehicle has the original silver finish,with no rust ever. The interior is like new. It has ice cold air cond. The only part of this vehicle that is not like new,is the rear window .It is a little bit fogged. If you have any questions ,please call me at 614-296-3418 Thanks

In a temporarily repurposed airport hanger in Monterey, CA, the world caught its first glimpse of the 2016 Mazda MX-5 Miata tonight, and I was fortunate enough to attend in person along with my fellow auto media colleagues, Mazda execs, a couple hundred Miata devotees and, oddly, a fair number of Duran Duran fans. The klieg lights have dimmed, Simon Le Bon is no longer ringing in my ears, and I'm left to ponder what I've seen. I've scavenged my notes - and my Twitter feed - to give you some details and brief thoughts.
Fair Warning: I can't claim to be completely impartial (I own a second-generation NB and consider the Miata franchise to be one of but a few sacrosanct franchises in modern motoring), but I will share my honest first impressions of the new car, both good and bad.
Here are my notes: