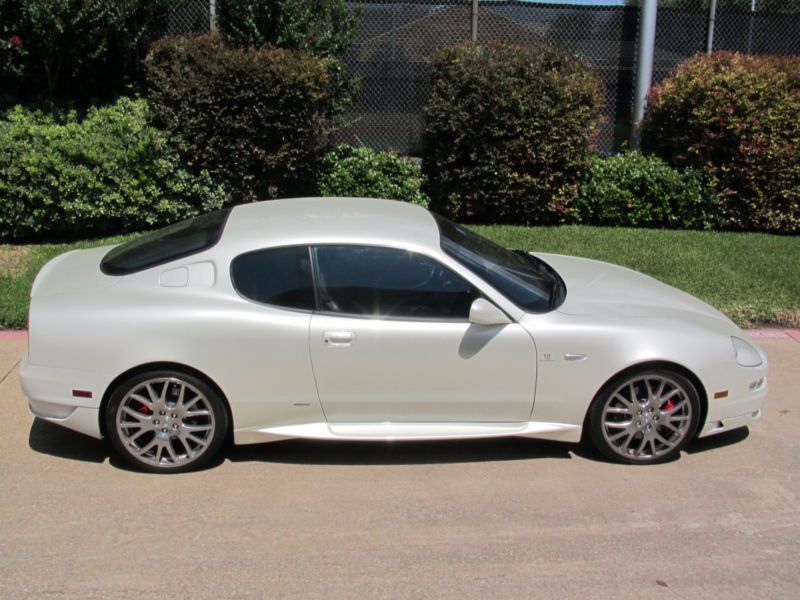 The monstrous exhaust is housed in a 4.2 engine (400HP) with red brake calipers ($550), 19" ballpolished GSport
rims ($1,190) and Maserati caps on the wheels to re-air the tires. The engine explains itself, coupling a 6-speed
"Cambiocorsa" Transaxle with a computer controlled clutch. The Skyhook Suspension ($2,500) supports stability and
control. The 4 wheels have an ABS braking, ASR traction control system and MSP stability control systems. These are
the support for this enhanced Italian sports car. The exterior has Xenon front lights and a modified exhaust, and
in the rear a smart "Maserati" of carbon fiber houses the rear plate.
The interior is exceptional with black leather seats and with red trim piping, with carbon fiber appointment and
steering wheel ($2,600 Interior 2). The seat memory and heated seats ($755) are also other options. The Pioneer
Premier Stereo with Bluetooth and CD, coupled with the subwoofer in the trunk are add-ons. Also, the Escort
Passport SR7 detector is included; say no more.

Maserati's product plans have taken a few wild turns, but as we get closer to production dates for the long-awaited offerings things are getting a wee bit clearer. The the sixth-generation Maserati Quattroporte is here, and a quick recap according to a report in Car and Driver has the smaller Ghibli sedan on Chrysler's LX/LY platform next, then the next-generation GranTurismo coupe and cabrio on a Maserati platform, then the Kubang SUV concept (pictured) that, for production, will become the larger Jeep-Cherokee-based Levante SUV.
All of which gets us to 2015. That same year, according to the report, the Levante will get a brother: a smaller SUV or crossover, perhaps sized like the Kubang concept, to challenge the Audi Q5 and the Porsche Macan. It is predicted to use the Compact US Wide platform, built for front-wheel and all-wheel-drive vehicles, that supports the Dodge Dart and 2014 Alfa Romeo Giulia. In addition to giving the premium brand a competitor in what is a very popular segment, a Maserati move slightly downmarket can help fill a gap while Fiat brass figures out what to do with Lancia.