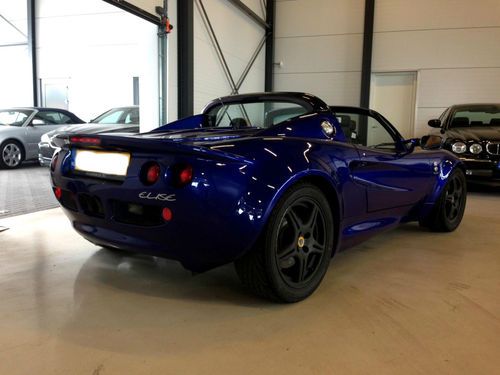 A vehicle as light and agile as the Lotus Exige is all about driver involvement, but those enticed by the nimble sports car's handling and performance who aren't keen on working a stick shift now have another option at their disposal.
Lotus has just announced the availability of an automatic transmission on both the Exige S and Exige S Roadster. For an extra couple thousand euros or pounds sterling, customers will now be able to order a six-speed automatic transmission. The two-pedal setup includes paddle shifters and Sport or Race modes that optimize shifting for "a more spirited drive."
Equipped with the slushbox, the Exige S Automatic is just as quick around Lotus' famous factory test track in Hethel, and even pips the manual version's 0-62 time by 0.1 second, now down to 3.9. Unfortunately, since the Exige isn't available Stateside anymore, however, American buyers can't get their hands on either version.

Well, this isn't exactly what we were expecting. The images you see above come from Motorcycle News in the UK and are apparently official renderings of what the upcoming Lotus C-01 motorcycle will look like. As you can see, it's sort of a power cruiser, with a raked-out front end and extremely wide rubber out back.
Power will reportedly come from a liquid-cooled V-twin engine sourced from KTM, similar to the one used in the Austrian's brand's own RC8R, but tuned to produce around 200 horsepower. It appears that the powertrain and all its related necessities will be housed in a carbon fiber monocoque (whether the bodywork serves as a stressed member or not, we can't say) in a traditional-looking black (really, exposed carbon fiber weave) and yellow color scheme.
From the looks of these renderings, the C-01 might be intended as a competitor for the Ducati Diavel and ought to be very quick in a straight line. We're not so sure that's what a motorcycle wearing the Lotus badge should be, even if its builders are only using the marque's name under license, but we're looking forward to seeing the final result in production trim.

Five years after it began, it appears the Dany Bahar tenure at Lotus is finally over. After former Lotus owner Proton brought in the ex-Ferrari and Red Bull marketing savant to run the company in 2009, everything had gone pear-shaped by 2012: Proton had been sold to Malaysian auto supplier DRB-Hicom, who suspended Bahar and then fired him for what it said were expense-account transgressions (although Bob Lutz reportedly said something different).
The separation led to the expected suit and countersuit, Lotus going after Bahar to get its money back, Bahar filing a $10.6-million suit againt Lotus for wrongful termination and potential bonus money. The case was set to go to trial next month but both parties have settled, the terms undisclosed, a DRB-Hicom statement saying only that "the parties involved in the legal suit have signed a Settlement Agreement and Release... and have agreed to withdraw their claims against each other."
Now that that bit of housecleaning is all cleared up, can new CEO Jean-Marc Gales please get our Esprit?