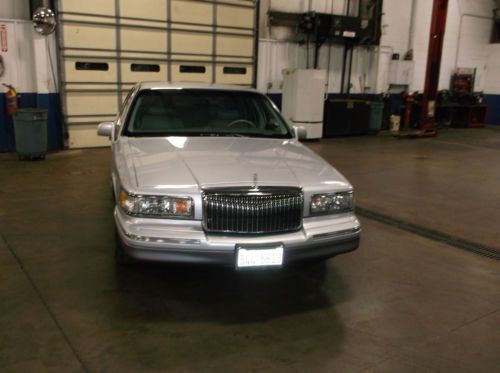 THIS CAR WAS OWNED BY SWARTZ FUNERAL HOME HERE IN FREEPORT ILLINOIS, IT IS IN GREAT CONDITION AND HAS BEEN SEVICIED REGULARY. THE ENGINE IS PERFECT AND YOU CANNOT EVEN FEEL THE IDLE SITTING AT A STOP SIGN. EVERYTHING WORKS ON THIS LINCOLN, ALL UPDATES ARE DONE AND THE TRANSMISSION HAD THE 70,000 MILE SERVICE DONE. THIS CAR HAS NO RUST INSIDE OF OUT SIDE THE DOORS AND THE PAINT IS STILL GREAT. THERE IS ONE VERY SMALL SPOT ON THE LOWER LEFT SIDE THAT IS ABOUT A QUARTER SIZE SPOT THAT MY LOCAL BODY SHOP SAID THEY WOULD FIX FOR 100.00. IT IS VERY MINOR. I WOULD NOT BE WORRIED IF I NEED TO GET INTO IT RIGHT NOW AND HEAD FOR LA, CALIF. THIS IS ONE OF THE BEST 96 TOWN CARS I HAVE EVER SEEN. THERE IS A CD PLAYER THAT GOES WITH THIS CAR. THIS ONLY HAS REAR AIR BAGS AND THEY PUT NEW REAR SUSPENSION AIR BAGS IN IT LAST YEAR. THE AIR RIDE WORKS GREAT. THE ONLY REASON IT NEEDED THEM IS BECAUSE IT SAT ALOT IN THE GARAGE AT THE FUNERAL HOME. NEW BATTERY AND NEVER SMOKED IN!!