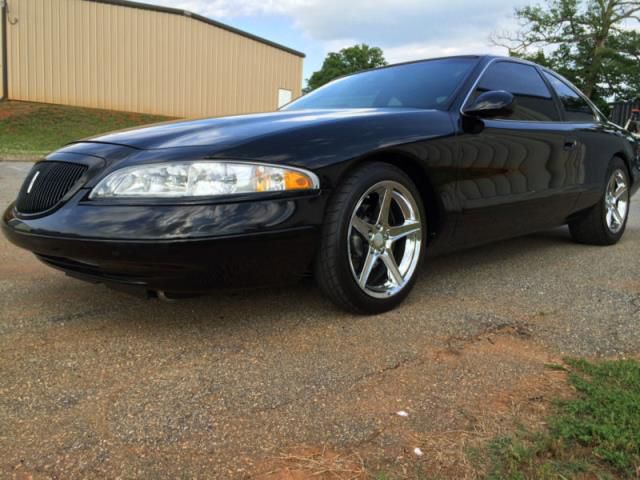 Engine: Forged internals, Kellogg crank, Manley rods, bigger cams, Diamond pistons, & a custom (only 1 in existence) NMRA Street Renegade intake manifold with CNC cut billet aluminum base plate & wilson manifolds burst panels in the lid. The turbo system was built by a that builds race cars & chassis. The cutting edge billet wheel turbos came from Reed at Work Turbochargers, a leader in small tire boosted racing. Reed also custom fabricated the 6" thick FMIC, it features twin 3" inlets and one 4" outlet that stays 4" all the way to the billet accufab throttle body. All piping & such are aluminum & done in matte black powder coat. Engine management is handled via BIG STUFF 3 that we tuned on my dynojet dyno. It has 160lb injectors and runs on E-85. The suspension: consists of a tubular K-member up front & tubular A-arms, car still has factory functional air suspension. The rear suspension has poly bushings in most of the areas except on the front of the diff, those are solid bushings there. It has support brace on the rear of the diff. It has a iron 8.8 center section as I broke the aluminum one at the drag strip one time. It has a dyno tech metal matrix driveshaft, it has DSS (The driveshaft shop) 1500hp 2000 race axles in it. The fuel system has twin Weldon 1100A pumps on the frame, these pumps are not quiet. The exhaust system is all custom & quiet until you hit the electronic cutout switch. The boost controller is a CO2 driven NLR AMS-1000. Wheels and tires. Wheels are Chrome 18" Saleen Speedstars with M&H drag radials on them. The front wheels have been custom narrowed to fit a skinny tire. The front tires are M&H. Transmission: Custom Turbo 400 conversion. The stereo.. It's a touchscreen NAV, DVD, double din Pioneer Z-2 with internal hard drive. It has a big 5 channel JL Audio amp and one 12" sub. All mids & highs are JL Audio components. Alternator is a 200amp Powermaster unit. Battery is a Shuriken competition one relocated to the trunk. Car has no issues whatsoever starting up. Interior, all new leather up front, rear seat condition is 9.0/10. Cup holder is not cracked like 99% of marks out there, no rips or tears anywhere. I have factory LSC floor mats in car, trunk is clean and not messy. Carbon fiber glovebox gauge setup. A/C, power steering work fine. Call or text questions 864-918-3321