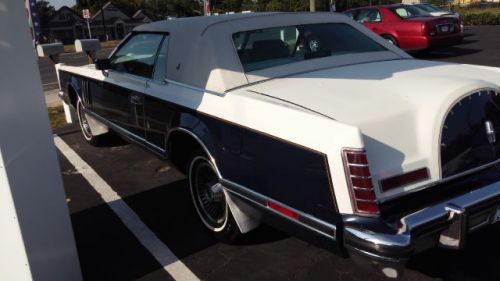 1-866-840-STAN (7826) The 1979 Lincoln Continental Mark V Bill Blass edition is probably the car that defines the disco era of the late 70`s more that any other car! While most of these Leviathans have been crunched or used in demolition derbies, there are a few that are well preserved and have achieved the collectible status that the model deserves. This Cream Puff has extremely low miles, has the original paint finish and the factory climate control air conditioning is ice cold! Detroit excess at its best,..lets hear it for Super Fly! We welcome you to "Stan`s Premium Cars" where we are not only a CarFax certified dealer but a non-auction dealer as well! We are located in Leesburg, a retirement community, in the heart of Central Florida. We buy privately as well as from our local new car dealer network. Again, WE DO NOT BUY FROM AUCTIONS! Additional pictures of this vehicle can be seen at www.stanspremiumcars.com.

Lincoln has already announced most of the trim level and option pricing for its upcoming 2015 MKC due out this summer, and now it has launched a configurator allowing prospective buyers to get a better idea of how this new model will stack up against other compact luxury crossovers. We already knew that the MKC will have a starting price of $33,995, but now we know that its price includes a destination charge of $895.
Models equipped with the base 2.0-liter EcoBoost engine come standard with the Premiere package - $33,100 for front-wheel drive and $35,595 for all-wheel drive. Both models offer equipment upgrades from the Select and Reserve packages. The $3,230 Select package adds features like leather seats, power passenger seat, folding and heated door mirrors and painted 18-inch wheels, while the pricier $6,935 Reserve package adds in heated and cooled front seats, panoramic roof, hands-free liftgate, two-tone wheels and an embedded modem (providing features such as remote lock and unlock, vehicle finder and pre-conditioning).
Opting for the new 2.3-liter EcoBoost inline-four raises the base price to $39,965, and it comes standard with all-wheel drive and all of the equipment in the Select package; the Reserve package is still optional. All models can be further optioned up with the $2,235 Technology Package (adding adaptive cruise, active park assist and lane keeping system) and the $580 Climate Package (heated rear seats and steering wheel, auto high beams and rain-sensing wipers). Checking all the options, a fully loaded 2015 MKC with the 2.3-liter EcoBoost will have a total MSRP of $47,715.