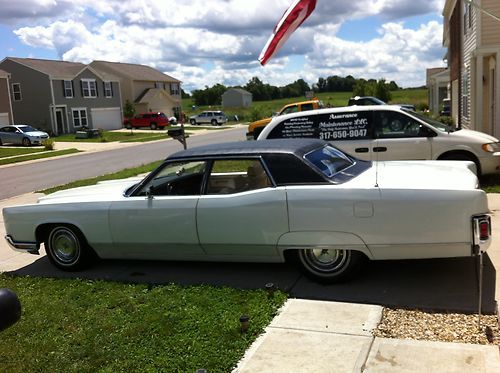 Condition: UsedA vehicle is considered used if it has been registered and issued a title. Used vehicles have had at least one previous owner. The condition of the exterior, interior and engine can vary depending on the vehicle's history. See the seller's listing for full details and description of any imperfections.Seller Notes:"Pretty cool old school Lincoln!!!! Pearl white paint, shaved door handles, all emblems have been shaved, and dual exhaust w/ cherry bombs.. Interior is in good condition and so is headliner for a 44 yr old car!! Body is pretty good too and runs great!!!! Drives like a lincoln should w/ a big block 460!! Just check out the pics if ur lookin for a hot rod lincoln!!!"

Pretty cool old school Lincoln!!!! Pearl white paint, shaved door handles, all emblems have been shaved, and dual exhaust w/ cherry bombs.. Interior is in good condition and so is headliner for a 44 yr old car!! Body is pretty good too and runs great!!!! Drives like a lincoln should w/ a big block 460!! Just check out the pics if ur lookin for a hot rod lincoln!!!