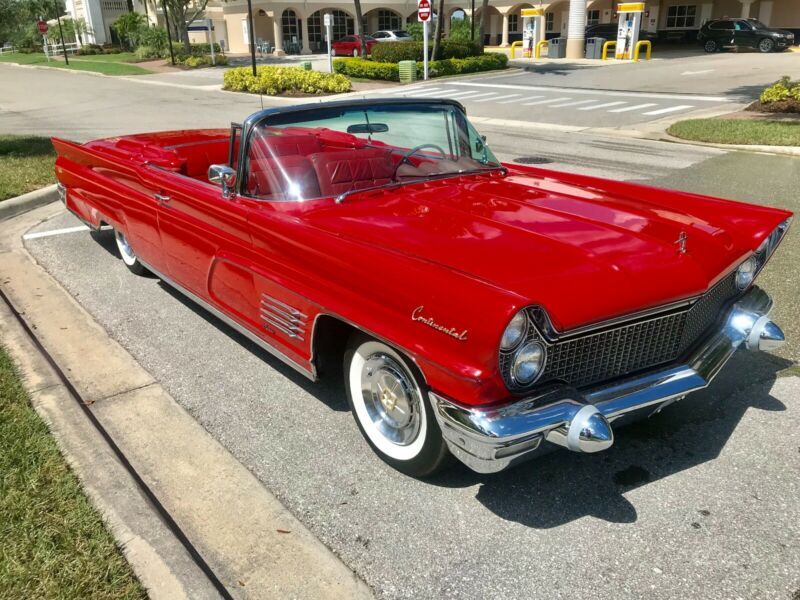 1960 LINCOLN MARK V CONVERTIBLE ORIGINAL CALIFORNIA CAR VERY RARE SPECTACULAR CONDITION. THIS IS ONE OF A KIND
SOLID NO RUST, ALL ORIGINAL INTERIOR WITH THE RARE STUNNING CHEROKEE RED PAINT(SEE PHOTOS). A REAL BARETT JACKSON
CAR. A SHOW STOPPER WHERE EVER I GO, ORIGINAL SPARE IS STILL IN TRUNK, CAR HAS HAD ALL THIS DONE: ENIGINE,
TRANSMISSION, FRONT END WORK,BRAKES,TREADLE VAC,COOLING SYSTEM, CHARGING SYSTEM,FUEL SYSTEM INCLUDING CARBURETOR
ETC, ALL NEW WIDE WHITE WALL RADIAL TIRES, COMPLETE NEW CUSTOM AIR CONDITIONING UNIT INSTALLED, MUFFLERS, CAR
COVER, CONVERTIBLE TOP PISTONS, HOSES AND PUMP, IGNITION SYSTEM,TUNE UP, EVERYTHING WORKS, THOUSANDS OF DOLLARS
INVESTED THE LIST GOES ON AND ON. YOU CAN DRIVE THIS CAR AT 80 MILES AN HOUR WITH ONE FINGER ON THE WHEEL, MY LOSS
YOUR GAIN .