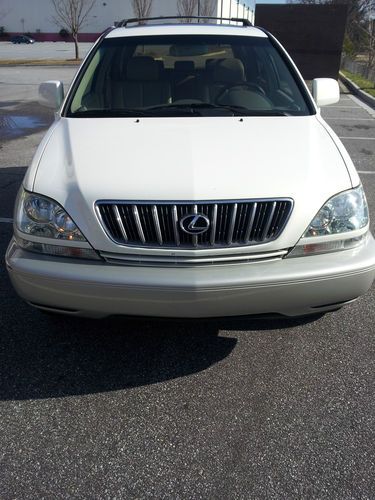 2001 rx300 white/silver and tan interior 2wd with 149000 miles original with all the maintenance completed at a lexus dealership only i am the second owner,timing belt package done at about 90k.transmission service at every 15000 miles ,oil change every 5k never miss a service and always done at the lexus dealership i got all the records since 2001.4 wheel alignment done about 2 thousand miles ago.this is a southern car never been up north it has 0% rush,never tow anything with it.front tires 70% rear about 98% goodyear integrity front brakes 90% rear 65% this vehicle is also equipt with xm satelite radio.this car is been well kept with absolutely no mechanical problems at all in past 2 months it went through 2 sensors a/f sensor bank 1 and front left wheel speed sensor.this car is super quiet and the ride is really smooth and it handles like car.