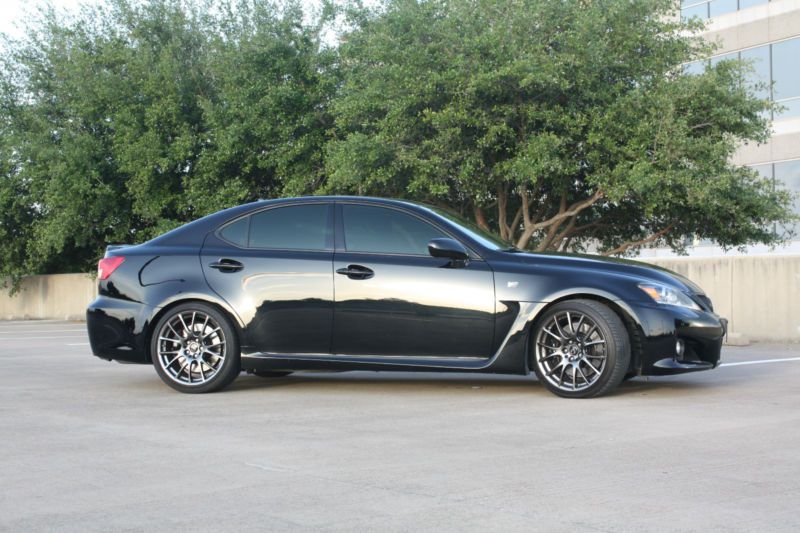 2013 Lexus IS-F
- 5.0 liter V-8, 416 hp / 371 lb-ft torque
- Eight-speed Sport Direct-Shift transmission with Paddle Shifters
- 0-60 mph in 4.6 seconds; 12.8 second quarter at 114 mph
- Top Speed: 170 mph (electronically limited)
- Mileage: 16 miles per gallon in the city, 23 mpg highway
- Brembo Brakes with six-piston front calipers
14.2 inch diameter - Front
13.6 inch diameter - Rear
- Factory 19-in Forged Alloy BBS Wheels
- 2013 model year IS-F Production: 397 cars worldwide; This one of only 139 ever brought to the United States
- Obsidian Black exterior
- Black interior; leather seats with suede inserts
- 66,266 original highway miles
- Extended Warranty for 4 years (until 2019) or 80k additional miles (to 145,000 miles), 100% Transferable to the
new owner
- Integrated Factory Navigation
- Mark Levinson sound system with SiriusXM
- Lexus Emergency Contact System with Inform capabilities
- Full Bluetooth integration
** THIS IS THE REAL, LEGENDARY LEXUS IS-F - NOT AN IS F-SPORT **
For sale is a very rare Obsidian Black exterior on Black Leather interior Lexus IS-F. It has been 100% Female
owned and driven. This extremely well cared for car has had all scheduled maintenance and service done on time,
and only at Lexus dealerships; I have all Service Records. I am a non-smoker, so Interior is immaculate with no
wear and tear on the Seats or Carpet. The car has never been tracked or raced. Always garage kept. This car is
in excellent condition. As you would expect from a Lexus, it runs perfectly and I have never had any issues with
it. I am sad to see her go, but since I got a Lexus SUV, I never drive this car anymore. It just needs to find a
new home...and I hope to find someone who can truly appreciate the greatness of the IS-F.