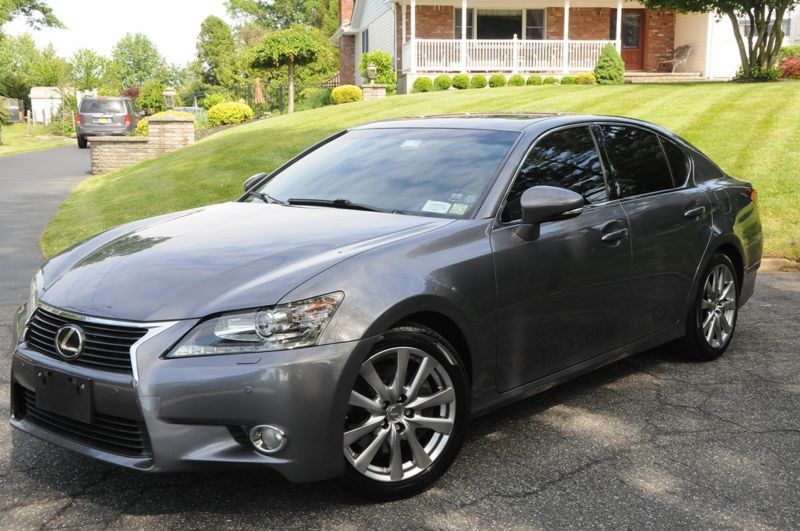 A mere trio of weeks after the latest report in the slow-moving Lexus GS F rumor cycle, we have a brand new batch of spy photos of the BMW M5-fighting sedan. Looking more and more production ready - notice the more finished exhausts compared to our last round of photos - the GS F can be seen poking around what we imagine is Germany.
If the RC and RC F Coupes are any indication, it looks like Lexus will start fitting its high-performance models with a new, single-frame version of the spindle grille while a dual-frame grille will be reserved for lesser trims. Backing up that suspicion is the new single-frame grille found on this prototype, marking the first time the suspected F line styling piece has been seen on a GS F prototype.
The aforementioned staggered quad exhausts look good on the GS' rear end, while a none-too-subtle rear spoiler ups the rear's visual flair. The low-profile rubber and the multi-spoke, black wheels are nice touches that work well with the front fascia features, in addition to the new, camo'd grille and substantial brake cooling ducts.

This summer, we brought you news that Lexus was recalling over 150,000 RX and RX hybrid crossovers tied to its massive pedal entrapment issue. An update to that story included word from the National Highway Traffic Safety Administration that it was considering launching a federal investigation into potential delays by the automaker in notifying owners about the problem. Now comes news that parent company Toyota will pay a hefty $17.35 million in fines for delaying its recall of the 2010 Lexus RX 350 and RX 450h. According to The Detroit News, the Japanese automaker is being forced to pay the maximum fine for delaying recalls - and this isn't the first time. In fact, this is the fourth time since 2010 that Toyota has been required to do so, including paying $48.8M in civil penalties in 2010 for failing to recall vehicles in a timely manner - in three separate campaigns.
In addition to the fines, Toyota has agreed to restructure the way it handles quality control and review "safety-related issues." Though the Japanese automaker has not admitted any wrongdoing, Toyota has agreed to meet with NHTSA for six months on the matter and may extend the meetings another six months.
US Transportation Secretary Ray LaHood says he is counting on Toyota to improve its ability to address such safety issues: "With today's announcement, I expect Toyota to rigorously reinforce its commitment to adhering to the United States safety regulations," he said in a statement.

It's a good thing senior editor Seyth Miersma doesn't live in Japan, or he wouldn't have been able to snap a photo like the one you see here, of a fresh-off-the-line Lexus RC F on hand at a first drive for media. That's because Toyota's Japanese arm has outright canceled its RC press launch. Sure, we've heard about events being delayed, but canceled? That's rare. Even worse is the reason: according to Automotive News, the event was nixed due to lack of interest. Wow.
In an email to media, Lexus said the event "has been canceled due to insufficient attendance," according to AN. The News posits that perhaps it would have just been better to hold the event anyway, in an attempt to save face, and that this is another example of the Japanese culture (especially youth) becoming less and less interested in cars. Of course, there's also the thought that local media just didn't want to drive out to Yokohama to drive the RC on a not-so-sexy press launch, which, if you ask us, is an incredibly lame excuse (do your jobs, folks!).
Either way, will this bode well for the Lexus RC's public launch? Will it receive the same lukewarm response when it arrives at Japanese dealers? We'll see.