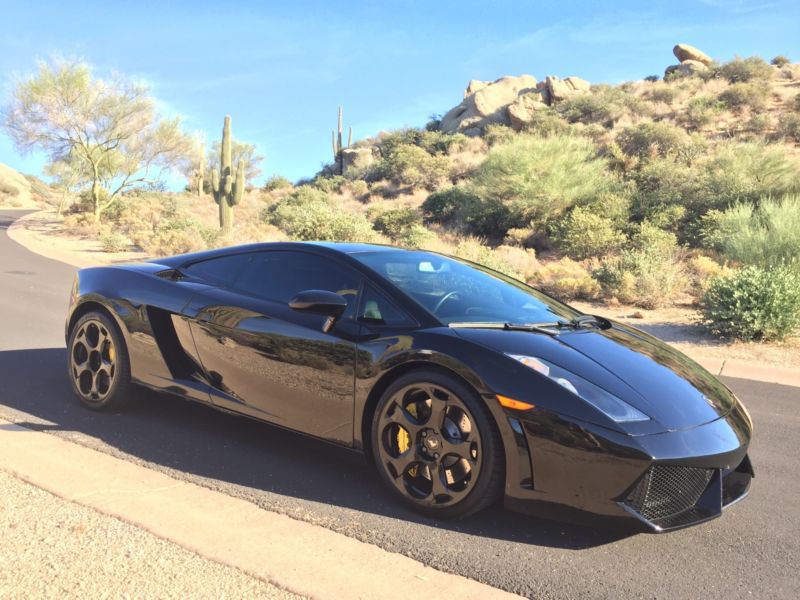 If you have more questions or want more details please email : ashagleeson@juno.com .

A truly special example of a 2004 Gallardo. This vehicle has been pampered its entire life. The original owner is
with the Miami Dauphins. It was purchased in Miami but delivered MSO to the BMC Lamborghini in San Francisco. The
original owner has a significant car collection of Lamborghinis and Bentleys.
When the vehicle was purchased by its second owner, with only 10,250 miles, a news front cap was installed, a la
Aventador, the wheels where powder coded, the windows where tinted and the rear brake lights where tinted to update
the look. The work was done by a certified, world renown fabricator over a period of three months. The second
owner relocated the vehicle from San Francisco to Scottsdale AZ where is currently resides. The servicing dealer
for the vehicle is now Lamborghini of Scottsdale who completed. A brand new set of Perrelli P-Zeros where also
installed, a full services was completed, which included updating the AC system to R-1 and changing the AC
compressor.
The vehicle is a one of a kind, truly well maintained, pristine example of a 2004 Gallardo.
Any questions are welcome.

This year's Geneva Motor Show served as the launch platform for three of the world's latest and greatest supercars. The Italians brought us the Lamborghini Veneno and the Ferrari LaFerrari, while the British unveiled the production version of the McLaren P1.
To put the three in better perspective - as if any of us will ever fully comprehend trio of million dollar coupes - the Aussies at Motoring.com built an infographic (click above to enlarge) that outlines what makes each of these cars so spectacular. Using unique colors to represent each of the vehicles, the team put together a variety of charts that focus on vital statistics, pricing, total production run and other parameters all designed to ease the process of digesting an overabundance of exotic goodness. We have uploaded the graphic full size in this link.

The Urus SUV still hasn't received the official green light for production, but that hasn't stopped Lamborghini from protecting its performance crossover in the land of stolen vehicle designs. These patent drawings submitted in China show what appear to be the Urus in the same concept form that we first saw last year at the Beijing Motor Show.
Last we heard, the Volkswagen Group had put development of the Urus on hold even though, more recently, the Bentley EXP 9 F (aka, the Falcon) has reportedly been given the nod. Although the existence of these patent images don't necessarily mean the Urus is going into production, they are at least another excuse to debate the SUV's stealth-bomber-style lines.