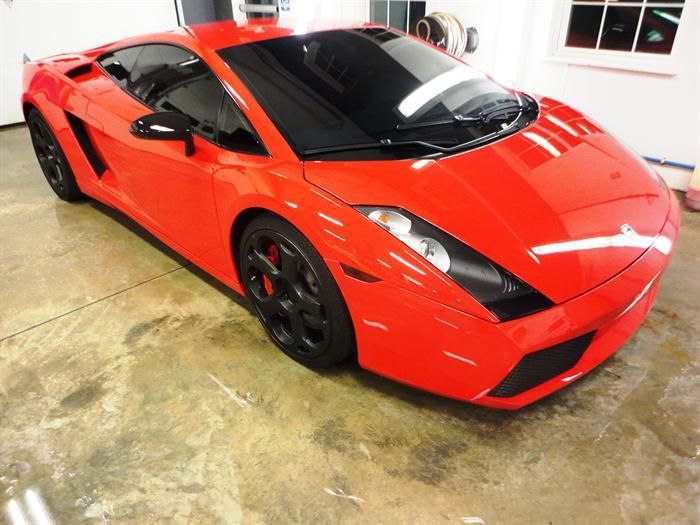 Please message me with questions at: scottsvvansteenwyk@ukforum.com .

Selling SuperMan the nickname of my 2004 Ferrari Red Lamborghini Gallardo with 48,800 miles which may vary on nice
days. It features a blue/brown interior and would be a perfect car for any new or seasoned Lamborghini driver.
I would describe the car as being in excellent condition both inside and out. There are no scratches, dints or
dings in the paint. There are a few rock chips on the front bumper and the front bumper has been scraped which is
unnoticeable unless underneath the car.
The AC is ice cold maintenance is totally up to date. Just recently had a $4,000 bill for parts and labor so it has
brand new tires, brand new brake pads, fresh fluids, and everything was checked up on and came back good. The
clutch was brand new at 34,000 miles and checked out to be 72% at 43,000 miles so i would estimate a 50% clutch
life.
I have all the current history of the car since personally owning it. The dealer I bought the car from had the all
the history dating back to it’s purchase so I can contact him and get that history for a potential buyer as well.
This car is the only Gallardo I know of fitted into a true Ferrari red paint job. The paint job was over
$15,000 alone and it was done right completely one of a kind. As you can see in some of the photos this car
literally can act as a mirror.
This car has been fitted with a fabspeed exhaust and there are no more catalytic converts. I have the original
catalytic converts so they can be reinstalled for anyone worried about emissions problems but boy you should hear
this car. It has a very aggressive note but on long cruises 6th gear 70-80mph there is no drone at all.
The day I got the car from the previous owner it still had the factory audio system installed in the car and
that didn’t work for me. I had it fitted with a brand new DDIN (gps, bluetooth, pandora… all the good stuff),
Jl speakers, Jl tweeters, a 12” compact Jl sub, and an amp. This rang in right around $3500 but it sounds great.
If your looking for window shaking interior rattling music this system isn’t for you but if you enjoy rolling the
windows down turning the music up and cruising the night away this is where its at.
Professionally tinted windows and trust me you need them. When I bought this car, it being my first Lamborghini
I expected to get some attention but it’s really unbelievable the amount you get. This car seeks attention from
everyone, little kids, teenagers, adults, and grandparents. It may be the color but the attention is there and
it’s nice to have those dark windows rolled up when sometimes your just not in the mood.
The taillights are tinted and really set the car off from the competition. Along with the taillights being
blacked out the wheels were also powder coated black. There is a scuff on one wheel but it’s not that bad and
i’d send photos to anyone who wants to see it.

Lamborghini 5-95 Zagato could be bound for limited production

Lamborghini has been seriously upping its production overt the years. When Audi took over in the late 1990s, the company's production was measured in the 200-unit range. Now it's making over 2,000 cars every year. But at the same time, Sant'Agata has been focusing on low-volume production as well, with a separate assembly line dedicated to putting together concept cars and limited editions like the Sesto Elemento and Veneno. And now it may just have another on its hands.
That would be the Lamborghini 5-95 Zagato, a unique coachbuilt supercar based on the Gallardo and unveiled last week at the Concorso d'Eleganza Villa d'Este on the shores of Italy's glamorous Lake Como. It was commissioned as a one-off custom for noted Lambo and Zagato collector Albert Spiess, but reports suggest that it could be put into limited production.
The viability of the project would likely depend on how many orders the Italians might garner for an expanded production run. Whether the project would be undertaken at Lamborghini's special projects facility or off-site by Zagato remains to be seen, but you can bet it would fetch a pretty penny or two, despite the fact that the platform on which it's based is now over a decade old and has since been replaced by the newer Huracán.

Is this the new Lamborghini Huracan?

All aboard the Leak Train! While we know that all the official images and details are coming soon, the Lamborghini Huracan (if that is its real name...) is showing up all over the internet (Automobile Magazine Hong Kong's Facebook page, for instance) in a dashing yellow paint scheme. While we're not presently able to confirm or deny the accuracy of these seven leaked images, when compared to the spy shots we've already seen, we can say they look convincingly real.
If they're legit, what we're looking at is the replacement for the Lamborghini Gallardo, which first went into production way back in 2003 and has gone on to sell an astonishing 14,022 units, a record for the Italian brand. Put another way, the Huracan has very large shoes to fill. Judging by its badge, which reads LP610-4, it will be doing so with 610 horsepower and all-wheel drive.
Take a look at the seven images above, and stay tuned for the full official floodgates to open in very short order.

Novitec has finished its tuning program for the Lamborghini Aventador, and it has called the mean-looking finished product, Torado. It looks like it wants to take the pedestrian sinisterness of the Aventador into an otherworldly rage, with carbon fiber vents, spoilers and protrusions lining the body from front to back.
Novitec says it's still good for daily use, even with four different stages of power tune and a fifth out-of-the-ballpark injection called "Bi-Kompressor." The power bumps start at 722 horsepower and 519 pound-feet and go up to 969 hp and 672 lb-ft with the bi-kompressor. The exhaust systems included in those packages are also good for shaving around 20 kilos from the car's weight.
There's a short press release below with more on Novitec's work, and a video of the Torado in the wind tunnel.