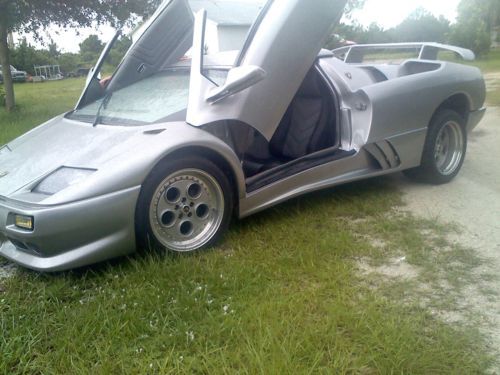 Unless you happen to live in one of the great supercar capitals of the world, seeing a Lamborghini up close is a rare treat. But even in such rarified company, some Lambos stand out more than others. We're talking here about elusive examples like the Reventón (of which only 20 were made), the $3.4-million Veneno (only four made) or this, the one-of-a-kind Egoista.
The Egoista concept was revealed a year and a week ago during Lamborghini's 50th anniversary celebrations. Unless you are a Lamborghini owner who traveled to Italy for the event, chances are you didn't get a chance to see it. But if you're heading to the Bologna region any time in the near future, you'll be able to check it out at the Lamborghini Museum in Sant'Agata.
There the one-of-a-kind single-seater concept with the aircraft-style canopy greenhouse will surely occupy a place of honor, alongside the many classic, racing and otherwise significant models - including the Sesto Elemento, Estoque and Miura concepts. Unfortunately, since Google's crew was there before the Egoista (or before us, for that matter), you won't be able to see it on Street View, so you're going to have to trek to northern Italy to see it for yourself.

It was probably the best headache I've ever had in my life. A spicy combination of Lamborghini's superlative new 2015 Huracán LP 610-4, fast-as-you-can-drive laps of the tricky Ascari race circuit, 80 kilometers of the Ronda Road and a healthy dose of southern Spanish sun had left me with a bit of a pounder. That cocktail of speed and noise had also granted me one of the best days of driving in my life.
As an encore to Gallardo, the single most successful Lamborghini model in history, and following on the heels of the most profitable era the company has ever known, the stakes for this Huracán could hardly be higher. What's more, considering that stablemate Avendator hasn't exactly come in for universal praise (despite its unquestionable commercial success), I flew to Spain with a small pit of doubt in my generally buoyant heart. Could Huracán possibly let me down?
It could, maybe. But it didn't. This is a car that most assuredly lives up to the hype, and is fully worthy of wearing the crown won for it by the outgoing Gallardo. Sorry for the spoiler.

1965 was the first time Zagato and Lamborghini hooked up, when the Milanese coachbuilder created the Lamborghini 3500 GTZ for Marquis Gerino Gerini. There have been several more collaborations since then, the one you see above being the latest: the Lamborghini 5-95, created for collector Albert Spiess and designed to be "a modern collectible" in honor of Zagato's 95th anniversary.
Underneath its Speed Racer curves is a Gallardo LP570-4, its visual mass pushed forward thanks to the striving front fascia and a wind deflector at the bottom of the windshield that lengthens the hood, and a shortened trunk that "reveals the brutality of the mechanical components" in back. Between them are Zagato trademarks like wraparound glass and the double-bubble roof, and the size of the obvious air intakes has been reduced by hiding others in the greenhouse and fixing a center intake above the roof.
The Lamborghini 5-95 is on show at this year's Concorso d'Eleganza Villa d'Este at Lake Como in Switzerland. As for being a collectible, since it's headed straight for Spiess' garage afterward, we'd say they've got that part sealed up. For you non-collectors, there's a short video where you can hear the car fire up and a press release below with a lot more info.