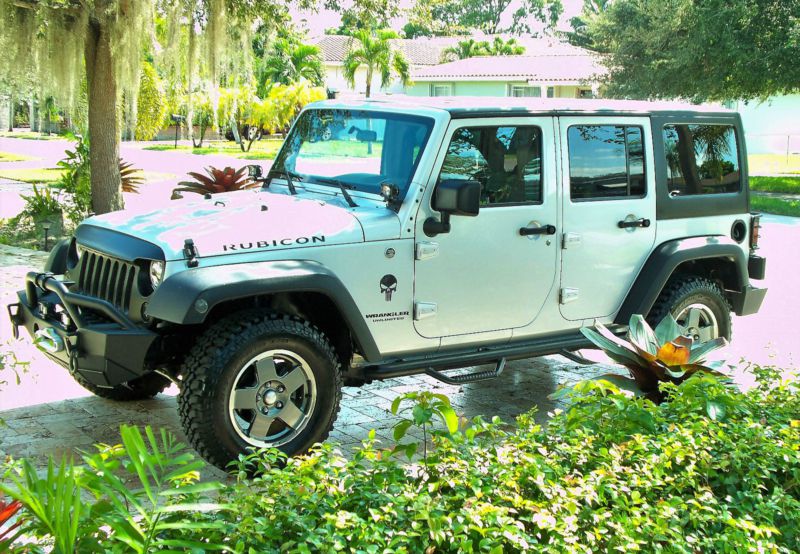 If you have more questions or want more details please email : basiliabyyore@westhamfans.com .

2007 JEEP WRANGLER JK UNLIMITED RUBICON 4X4 PREVIOUSLY OWNED BY CHRIS CORNELL!
You are looking at a very special 2007 Jeep Wrangler Unlimited Rubicon 4x4. This Jeep is not only in my opinion the
best 2007 Jeep Wrangler Rubicon I have ever come across but it has an incredible ownership history of an American
rock star icon and legend. First the details, this jeep has the best color combination of bright silver metallic
paint on gray and black interior. It has a black removable hard top with black solid steel bumpers, black fenders
and trim. It has a clean Florida title and car fax and comes with 70,450 well maintained original miles as of the
day of this posting. This Jeep has an automatic transmission with Rubicon 4x4 package which includes Dana 44 front
and rear differentials, skid plates undercarriage protection and electronic sway bar disconnects and lockers. This
Jeep also has many options like automatic transmission, power door locks, power windows, Infinity Premium sound
system with 6 disk CD changer , alarm , 2 auxiliary power outlet, cruise control, vehicle anti-theft system, fog
lamps, adjustable steering wheel, leather wrapped steering wheel, intermittent wipers, variable speed intermittent
wipers, Mopar Jeep all weather rubber front and rear floor mats, key less entry, power steering.
This Jeep also includes many aftermarket upgrades like: Mopar Hulk 17 inch alloy new wheels on new BF Goodrich
Mud Terrain 255/55/17 tires with spare. In addition this Jeep has brand new solid steel powder coated rock crawler
front bumper with winch plate mount, led fog lights and led cube lights, D-Ring shackles, protective composite
bumper skid plates and trail jack mounts. Also includes rear heavy duty Rampage Recovery solid steel powder coated
bumper with led back-up lights and D-Ring shackles and tow receiver hitch. This Jeep has a complete led upgrades
like: Front led headlights with daytime running halo rings, smoked led amber turn signals and side marker led
lights, windshield pillar led cubes and rear smoked led taillights and 3rd brake light led upgrades. This Jeep has
it all and is a head turner which has been tastefully done.
This Jeep has to be the best 2007 Jeep Wrangler I have ever come across which also has low miles. Mechanically it
is absolutely perfect and has been serviced routinely and maintained in excellent working condition in and out.
Please note that the Jeeps auto history shows a minor accident which was only a scratch on the stock plastic bumper
cover which is no longer present. I don't even feel its worth mentioning but I wanted to explain it and if you
would like pictures to show this, I can provide them for your piece of mind. This Jeep has never been in a real
accident of any kind. You will not find a 2007 Jeep Wrangler in better condition and must be seen in person to be
fully appreciated.
This 2007 Jeep Wrangler Unlimited Rubicon was originally owned by rock superstar legend Chris Cornell of
Soundgarden and Audioslave fame. He has also had an amazing solo career as well which all together has spanned over
32 years. Chris Cornell's work has won Grammy awards and has been nominated many times and is regarded as the
godfather of the grunge rock 90's movement. Chris Cornell is considered one of the greatest rock singers and song
writers of all time with an endless amount of talent along with an epic voice. In my opinion Chris Cornell is one
of the greatest rock singers of all time.
I have full documentation and proof that this was Chris Cornell's personal Jeep and will include documentation with
the sale. This Jeep was owned by Chris for several years as he purchased it new in 2007 and sold it in 2015. This
is not one of those celebrity vehicles that was owned for a short time. This Jeep was his and used by him for
several years. In addition to that this was the first year the Jeep Rubicon Unlimited was produced making even more
collectible and valuable. I am the second owner and I cant tell you what an incredible honor it has been for me to
own this Jeep being such a big fan of Chris of over 25 years of following his music and talent. It took me a few
years to find the perfect Jeep Wrangler in the right condition which also includes an amazing ownership history of
someone I admire so much. With all that said I will say considering previous celebrity vehicles sales the asking
price is well justified and is an excellent investment which will increase in value. If It does not sell for what I
feel its worth, I will gladly adorn it in my possession for the rest of my life.