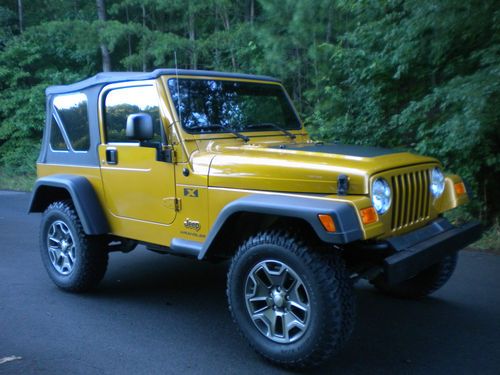 2003 JEEP WRANGLER- 4.0 LITER- 5-SPEED- BLACK LEATHERETTE INTERIOR- A/C- AM/FM CD- RARE INCA GOLD PEARL PAINT(ONLY OPTIONAL IN 2003)- TINTED WINDOWS- ORIGINAL TOP WITH TINTED WINDOWS- ONLY 52,937 MILES CURRENTLY- HAS NEW 2013 JEEP WRANGLER RUBICON WHEELS WITH LESS THAN 200 MILES ON THEM OR I CAN INSTALL 2012 RUBICON WHEELS WITH 15,000 MILES ON THE TIRES, SPARE HAS NO MILES, OR I CAN INSTALL 2006 JEEP WRANGLER GOLDEN EAGLE WHEELS WHICH ARE NEW- HAS NEW FACTORY STYLE DOUBLE WIDTH FENDER FLARES- NEW NOS AM/FM CD PLAYER WITH KICKER SPEAKERS- UNIQUE HOOD DECAL WITH TOP FRONT FENDER DECALS- NEW 2006 JEEP FLAT BUMPER CAPS- TWO INCH SUSPENSION LIFT WAS INSTALLED AT JEEP DEALER WHEN NEW- NEW HEAVY DUTY REAR TIRE CARRIER OR FACTORY TIRE CARRIER CAN BE INSTALLED- UNDER HOOD IS ULTRA CLEAN- NO DENTS OR DINGS ON BODY- THERE ARE A FEW NICKS ON FRONT EDGE OF FENDERS AND GRILLE AND A SMALL SCRATCH ON UPPER PASSENGER DOOR THAT IS VERY MINOR FOR A 10 YEAR OLD JEEP- THERE ARE SOME SMALL SCRATCHES ON THE GLOVE BOX- THERE ARE LIGHT SCRATCHES ON THE REAR WINDOW- THIS JEEP IS EXCELLENT CONDITION IN ALL OTHER ASPECTS- THERE IS NO RUST DUE TO BEING A NORTH GEORGIA JEEP SINCE 2004- THIS JEEP IS READY TO GO AND NEEDS NOTHING- I ENCOURAGE THOSE WHO CAN SEE IT IN PERSON TO DO SO AS THIS JEEP WAS NOT OFF-ROADED OR ABUSED- I AM SELLING BECAUSE IT SITS IN THE GARAGE TOO MUCH AND I WANT ANOTHER SPORTS CAR- ANY QUESTIONS EMAIL ME OR CALL 706-844-6739