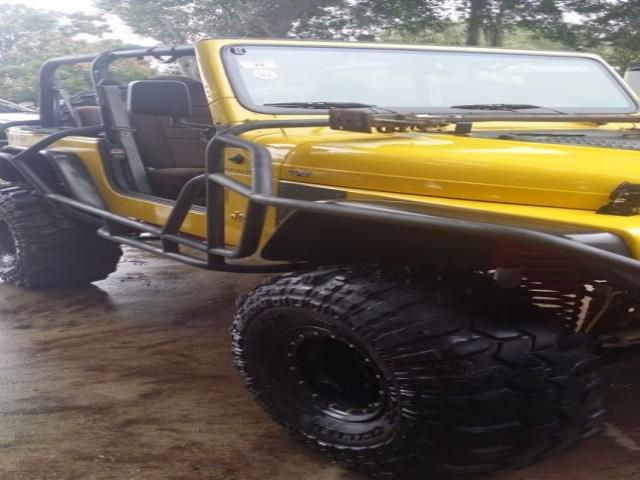 This is a 2000 wrangler sport that has been totally re-done. It only has a 3100 miles on it since the conversion, the body has about 42000 on it. I keep it in the garage and overly maintain every part with synthetics. This is a must see and drive vehicle, crazy power, drives with one finger at 60mph. Here are the parts that are on this. As it sits I have 26000 into it. ZZ4 Chevy 350 Crate engine. Headers, and dual flowmaster mufflers Holley Truck Avenger off-road Carberator TH350 auto Transmission (totally re-build and under warranty from AAMCO) Trickflow Tranny pan, all synthetics Transfer case is a custom NP231HD case with a slip yoke eliminator, 6 planetary gear& wide chain Rear axle has Dana 44 Alloy brand Chromoly 35spline axles (under warranty from AAMCO) Alloy brand new 4:11 ring and pinion ARB air locker ARB compressor already setup for future front locker Front axle has dana35 with limited slip differential 10" Skyjacker long arm suspension lift (8" suspension 2" body) Runva 11,000 lb winch with synthetic cable 3 core aluminum radiator Hood lift shocks installed Hood vent kit Blue Optima Battery 250A alternator from Quality power Electric fan from a Lincoln mark 8 (VIII) Has cabin shut off switch. Power Steering box from a Dodge Durango Marine Radio, Kicker amplifier, upgraded from speakers, added rear speakers, JL audio sub Rhino lined with kevlar interior, inside of the doors, and roll bars (lifetime warranty) Tires are Super Swampers 38.5/14.5 on 15" rims. Front bumper ties into full body roll cage Rear bumper has the hitch and tire carrier built into it. Lockable under seat safe, lockable side compartments Air to fuel gauge with O2 Sensor Vacuum gauge New seats in the front but everything has the neoprene covers on them. Spyder Shade cover for driver and passenger. Front and rear drilled and slotted rotors, rear upgraded to disk brakes. Heating and AC don't work but they are there to tie into if needed. Here is all the extras that come with it. ARB air hose to air up all the tires STAUN automatic tire deflators ARB air gauge with inflator Air filter parts for snorkel that was never put in. All the ball joints on suspension are re-build-able. Included is 2 rebuild kits for each one. Carb riser, vacuum gauge, timing gun, Carb jet kit and fuel curve adjusters The old avenger 670 holley carb New Dana 44 Alloy brand ring and pinion.